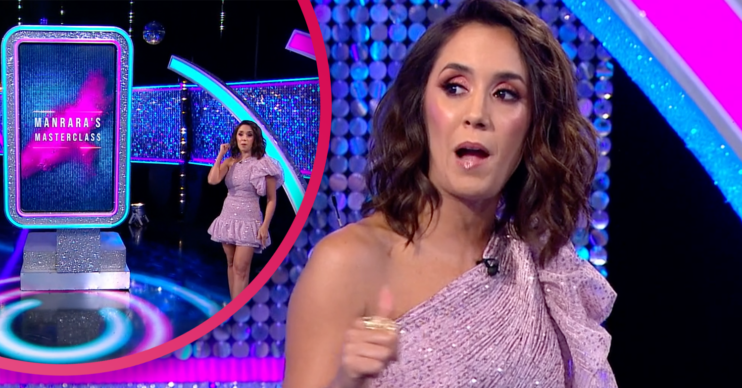 Viewers weren't so sure about her moves last night

Janette was joined by former Strictly contestant Debbie McGee for the segment.

And it didn’t go down entirely well with viewers at home.

In fact, one said it was no wonder Janette had never won the show based on her teaching technique!

What happened on BBC Two Strictly spin-off It Takes Two?

Janette and Debbie attempted to teach viewers at home some basic rumba steps on the show last night (November 25).

At the start Janette explained that she would be starting off with a step that’s never usually associated with the rumba.

However, she explained that she just wanted to get everyone in the correct starting position.

She then proceeded to teach the basics of the dance.

In an attempt to explain one step in layman’s terms, Janette likened it to someone forgetting their keys and reaching round to check they’d turned off the oven.

As she did her demonstration, she said: “I forgot the keys in the house and did I turn off the oven?”

It’s fair to say they didn’t enjoy the dance class and channeled their inner Craig Revel Horwood to offer their critique.

Others claimed that they’d spotted Janette make a mistake with her steps – and gave her a four out of 10 for her efforts.

They declared: “If @JManrara is doing a rumba masterclass on @bbcstrictly #ittakestwo she should wear shoes that don’t force her to do heel leads… #4paddle.”

Another added: “Heel leads in a rumba? [face palm emoji].”

A third said: “Someone tell Janette that’s not a cucuracha…. It’s a rumba time step.”

Others also commented on the host’s high heels and said watching her dance in them as “nail-biting”.

“For the segments where Janette is dancing, could she be allowed to wear heels that don’t risk a broken ankle? Watching her waver with every first step is nail-biting,” they pleaded.