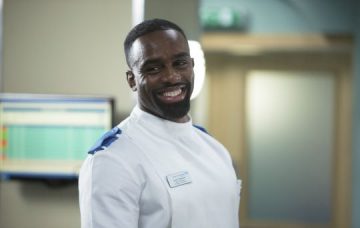 The photo leaves very little to the imagination...

While many of us are concealing our Christmas food babies under billowing layers this January, Charles Venn clearly has nothing to hide.

The Strictly Come Dancing star, 45, has shared a new year message with his 64,700 Instagram followers – but it was the accompanying picture that caused quite a stir.

Alongside an uplifting message oozing with positive vibes about the upcoming year, Casualty actor Charles posted a photo of himself doing a bit of oozing himself – sex appeal.

He then added: “However you celebrate tonight please be safe, much love.”

The picture showed the actor standing underneath a waterfall – Peter Andre style – wearing nothing but a pair of soaking wet black shorts.

And fans were, frankly, thankful for the sight of his rippling abs and toned torso. What’s not to love?

One simply said: “Wouldn’t mind being in that waterfall with you!”

Another said: “Oooof!! Be still my twitching ovaries.”

“Phwoar”, “wow” and “nice” were also common comments, while one simply described Charles as a 10 out of 10.

One cheeky fan wrote: “Trying not to look at those wet shorts @charles_venn owwwwweeeeeee it’s not working!”

Another posted a picture of an aubergine, which we’re too shocked to explain here!

In fact, some besotted followers were even calling for Charles to release his own calendar.

Charles, who plays Jacob Masters in BBC medical drama Casualty, won an army of fans when he was partnered with Karen Clifton during last year’s Strictly Come Dancing.

They were eliminated in the 11th week, despite getting a high score of 35/40 with their rumba.

Would you like to see more of Charles Venn’s ‘fitness videos’? Leave us a comment on our Facebook page @EntertainmentDailyFix and let us know what you think!