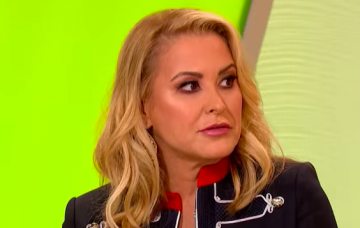 But she's in touch with "pretty much everyone else"...

Former Strictly Come Dancing star Anastacia has admitted she is no longer speaking to her professional dance partner, Brendan Cole.

The US singer, 49, was paired with Brendan for the 2016 series of the dancing show and, at the time, rumours of them not getting along were rife.

Now, in a new interview, Anastacia has admitted she is in touch with “pretty much everyone” she met during her time on the BBC dancing show.

Apart from Brendan, that is…

Speaking to The Mirror’s 3am, Anastacia said: “We don’t have that kind of connection.

“It was just for the show.

“But I speak to pretty much everyone else.”

Anastacia and Brendan, who was sensationally sacked from Strictly Come Dancing earlier this year, made it to week four together during their time on the BBC1 contest.

During week five, when Anastacia was eliminated, she had been partnered with Gorka Marquez after Brendan fell ill.

But in the lead up, it was claimed Anastacia and Brendan were at “loggerheads” and not getting along behind the scenes.

However, Brendan was very keen to quash the reports and insisted that it was just a case of two “strong-minded” people working together.

Writing in his column for Digital Spy at the time, Brendan said: “We’ve definitely had some conversations, I won’t lie about that.

“I think we’re both two very strong-minded individuals in a process, but we get along very, very well.”

Meanwhile, earlier this week the 2018 Strictly professionals line-up was confirmed – and it was revealed that pro-dancer Chloe Hewitt was also leaving.

Following the announcement, Brendan sent a message to Karen Clifton, who said she was sad to see both him and Chloe go.

Brendan replied: “You are a beautiful soul KC! Thanks gorgeous. And congrats to you and all of the #SCD Pro’s and of course to the newbies joining for series 16 (sic).”

In January, Brendan confirmed his departure from Strictly during an appearance on ITV’s Lorraine, saying he was shocked and gutted not to have been invited back.

He said: “I’m a little bit in shock. I’m quite emotional, a bit raw about it.”