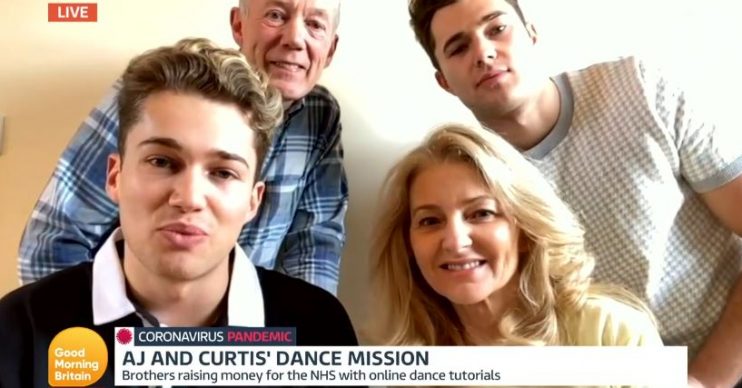 The brothers spoke via video link to talk about their #dressupdancedonate campaign to raise money for the NHS.

Lorraine asked if the pair were isolating alone.

And soon the whole Pritchard family was live on TV!

Commenting : “That’s not your mum that’s your big sister!”

Lorraine Kelly was impressed with Love Island star Curtis Pritchard’s manners as he immediately gave up his seat for his mother.

Those tuning in at home agreed.

One said: “@CurtisPritchard giving up his seat for us mum on Good Morning Britain. That has just melted my heart #truegent”

Another tweeted: “CurtisPritchard giving up his seat for his mother on #GMB, during an interview is confirmation that there’s some well brought up lads out there.”

Lorraine asked Debi if the boys were driving her crazy and the proud mum answered “no.”

Good Morning Britain fans were delighted  by the  surprise appearance.

One said: “@GMB such a proud mum of AJ and Curtis. Makes me smile.”

Another user shared: “The tv just said “stars aj and curtis pritchard” and the WHOLE family is staring at me.”

The famous brothers are encouraging people to get active and learn a dance routine online.

In a humorous segment, Strictly’s AJ was seen dancing in his dressing gown.

Curtis: “We are on a mission to get the nation dancing as everyone is at home sat on the sofa.”

AJ continued: ” We want people to dress up and donate.”

Curtis: “We want to give back [to the NHS]. We want to raise money and help those guys out.”

Lorraine Kelly asked if she could do the routine.

Curtis reassured she could, as she was “a talented young lady.”

Curtis Pritchard spoke about how the NHS has helped them in the past.

In an emotive moment, Curtis detailed how the brothers were victims of an attack back in December 2018.

The attack took place while Curtis and AJ were at a nightclub in Cheshire.

Leading the star to pull out of Dancing With The Stars Ireland 2019.

Read more: AJ Pritchard is reportedly too traumatised to leave the house after shocking assault

Huge thank you to @Aj11Ace and his bro @CurtisPritchard for supporting our #COVID19 Urgent Appeal. Check them out at 9am with @reallorraine on ITV! #dressupanddance https://t.co/B3Q2fxdLuS

The star recently quit after four years on the show.

“It is the best show on TV”

“But, there are so many more opportunities to explore.”

Their mum added: “We will still all support Strictly Come Dancing but we support AJ.

“His light is burning bright and he needs to use that energy to explore new opportunities”.

Find more information about the #dressupdancedonate on AJ’s Instagram.