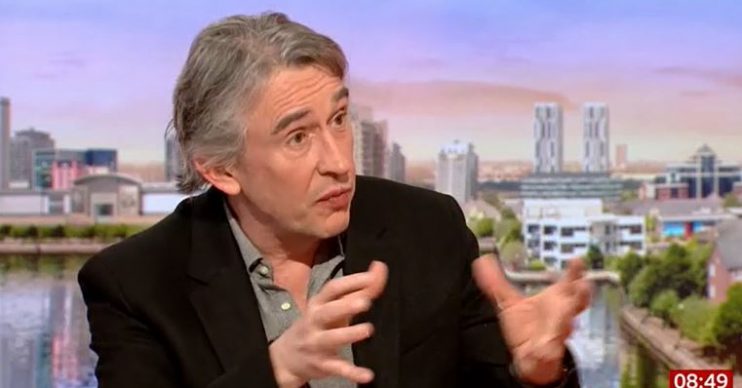 She has a cameo in his new film

During this morning’s (February 21 2020) episode, Steve was on to chat about his new film, Greed, which features a cameo from the former Love Island host, who tragically took her own life last weekend at the age of 40.

When asked by host Jon Kay what it was like to play the film’s main character, the star explained how the movie highlights wealth inequality within the fashion industry.

Steve said: “The character I play is sort of an amalgamation of a lot of super-rich billionaires rolled into one.”

Speaking further, he admitted that while it might sound “sanctimonious”, there is a political message in what is otherwise just a “funny film”.

“It sounds quite… sanctimonious,” Steve said on the programme. “But we are trying to point a finger at the huge gap between the super rich and the super poor… but it’s a comedy, we’re trying to makes a serious point in a funny film.”

After Steve elaborated that issues highlighted in the film include the cost of high street fashion and the exploitation of workers, the interview moved on to Caroline Flack.

Rachel called her cameo a “poignant moment” in the story and told Steve it must have been “very strange” for him when he heard she had died.

I don’t want to use what is a tragic death to make political capital out of it.

But Steve replied: “It’s tragic, there are lots of issues raised by it about social media and press… the discourse that takes place on social media… but I don’t want to use what’s a tragic death and tragic occurrence to make political capital out of it.”

He went on to say that, in his view, the problem with social media platforms is that their users “don’t see the whites of the eyes” of other users, as he called for people to “step back and question” how they speak to one another.

An inquest earlier this week ruled that Caroline hanged herself in her London apartment, as she faced a trial for the alleged assault of her boyfriend Lewis Burton, which he vehemently denies.

It was claimed Caroline was distraught over the Crown Prosecution Service’s decision to pursue her assault trial and now, the Metropolitan Police has referred itself to the Independent Office for Police Conduct watchdog.