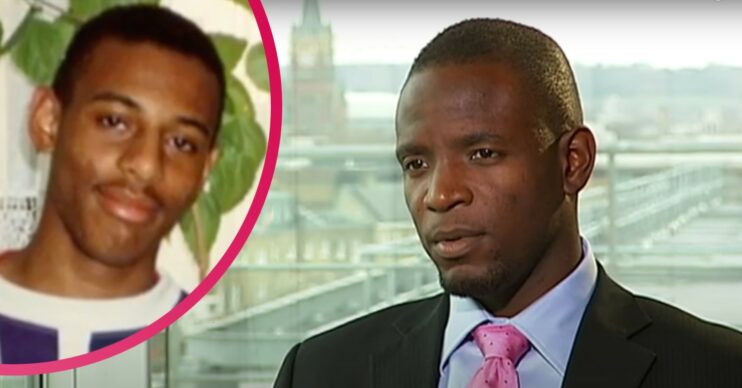 Duwayne was with Stephen when he was tragically murdered

Stephen Lawrence was murdered in 1993, as his friend Duwayne Brooks watched on helplessly – but where is Duwayne now?

And who portrays him in the ITV three-part drama Stephen?

Who is Duwayne Brooks?

First of all, Duwayne Brooks was born in Lewisham to Jamaican parents.

He grew up in Deptford and became good friends with Stephen Lawrence.

Tragically, Duwayne witnessed Stephen’s death on the day he was murdered on April 22 1993.

A gang attacked Duwayne and Stephen as they waited at a bus stop in Eltham, London.

He subsequently sought damages for his treatment by the police in the aftermath of the murder, as a suspect rather than a witness.

Although the claim was initially rejected, Stephen’s murder led to an inquiry headed by Sir William Macpherson.

The inquiry concluded that the Metropolitan Police Force was “institutionally racist”.

In 2006, Metropolitan Police finally apologised for the treatment Duwayne received after the murder and he was awarded £100,000 in compensation.

The settlement, believed to be the largest of its kind, came at the end of a six-year legal battle by Duwayne.

Consequently, Duwayne went on to pursue a political career.

He continues to speak publicly about Stephen’s murder and racism in society.

He has appeared in the TV documentaries Stephen Lawrence: Justice for a Murdered Son, and Stephen: The Murder that Changed a Nation.

Where is Duwayne Brooks now?

Duwayne, now 46, continues to be a player in politics.

In 2009, he became a councillor for the Liberal Democrats in the London Borough of Lewisham.

In 2010, Brooks was named among the potential candidates for the 2012 London mayoral election but was never shortlisted.

The Queen appointed him Officer of the Order of the British Empire in the 2015 Birthday Honours for public and political service.

He joined the Conservative Party in May 2018.

Furthermore, in 2020, the Tories long-listed him to be their 2020 London mayoral candidate, but he was not selected.

Read more: What happened to the killers of Stephen Lawrence? Where are they now?

In 2006, Duwayne released his book Steve and Me: My Friendship with Stephen Lawrence and the Search for Justice.

The book details his account of what happened on the night of Stephen’s murder and the years that followed.

He speaks openly about his mistreatment at the hands of the police and his struggles with post-traumatic stress disorder.

Who plays Duwayne in ITV1’s Stephen?

TV viewers will recognise Richie from his roles in Small Axe, Liar and Top Boy.

Stephen continues on Monday September 6 2021 at 9pm on ITV1.

Are you watching Stephen on ITV1? What do you think? Leave us a comment on our Facebook page @EntertainmentDailyFix.