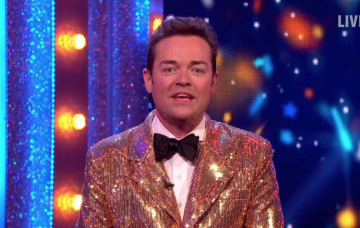 There's only one man for Britain's Got More Talent!

Stephen Mulhern recently discovered he was irreplaceable during filming for the Britain’s Got Talent auditions.

The 41-year-old, who hosts the ITV2 spin-off show Britain’s Got More Talent, was given time off when he became ill in January.

The presenter had assumed someone else would step in on the days he was unable to film but he was told by ITV bosses that there was no point, as nobody could host the show like him!

“At one point, I did say they should get someone else to do the days I wasn’t there so that we still had content.

“But ITV said, and I took this as a huge compliment, that I’ve made the show my own and there’s no other presenter they could see doing it in the style I do it,” he told the Radio Times.

This meant acts who had auditioned while he was absent had to return to the arenas so they could film with Stephen, who has hosted BGMT since it first started 12 years ago.

Stephen said he was impressed that many of the acts were willing to come back – even those who had been rejected by the judges.

While the Catchphrase host was feeling better when he returned to work, he was still on doctor’s orders to rest his voice for a full two weeks, because he was in danger of causing permanent damage.

He had to write what he wanted to say on a white board, which he said made him feel like “a right idiot”.

The magician also didn’t get much sympathy from Simon Cowell, who didn’t believe he’d really lost his voice!

He said Simon did put jokes aside to have “a good off camera chat” with him when he was better about how health scares can put things into perspective.

It was performing every night over the festive period in 2017 that led Stephen to lose his voice, so he said he will no longer do panto, even though it’s been a work staple for him for more than a decade.

Despite his new work ethos, he has still been busy this year with BGMT. After filming the auditions, he’ll be back for the spin-off after the live shows in May.

He has also been part of Ant and Dec’s Saturday Night Takeaway and had to take a more prominent role to support Declan Donnelly after Ant McPartlin recently stepped down from work commitments.

His hard work on BGMT has also paid off, as he celebrated victory at the TV Times Awards on Instagram on Wednesday. He posted a video singing “we won!” along with a rap, as he took an open top bus ride around Croydon.

The programme won Favourite Digital Show as voted by readers of the TV Times.

Can you imagine another host fronting BGMT? If so, who? Leave us a comment on our Facebook page @EntertainmentDailyFix and let us know what you think!