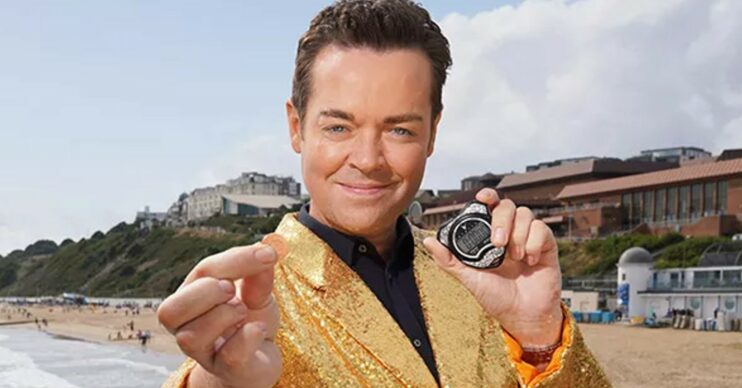 The ITV star has admitted how he stays so positive

Stephen Mulhern once revealed what helps keep him strong, even at his weakest moments.

The In For A Penny host, 44, is known for his bubbly personality and infectious laugh on shows such as Britain’s Got Talent and Catchphrase.

He’s currently starring on the gameshow In For A Penny, which was born out of a segment on Ant & Dec’s Saturday Night Takeaway.

In the middle of the pandemic last year, Stephen revealed that the one thing that helped him get through some of the darker moments was laughter.

Stephen Mulhern on how he copes with life’s tougher moments

“Listen, if you didn’t enjoy doing this show, you would have to go, because I know it’s not down the mines, or it’s not saving people’s lives, but it is delivering laughter and they say it’s the best form of medicine. And I do believe that,” he told PA.

“No matter how tough stuff is, if you can have a laugh or a joke, or if you can cheer somebody up, it does take your mind off stuff.

“The show is only a half hour, but it’s a half hour just to escape whatever you need to escape from. And as long as we can keep doing that, that will be a dream.”

Stephen also shared that one of the best aspects of filming In For A Penny is that he was able to meet the public up close.

It does take your mind off stuff.

“But the good thing about it is that everybody’s quite honest. And also hearing what the people that watch the shows that you’re part of, actually do enjoy. So it’s good,” he added.

Earlier this year, Stephen was absent from the limelight after being hospitalised for a mystery illness.

However, returning to Ant and Dec’s Saturday Night Takeaway he thanked fans for their support.

He also said: “No seriously, I haven’t been too well, thank you so much for all of your lovely messages.

“Forget about all that now, because the show must go on.”

In For A Penny airs Saturdays at 6:30pm on ITV.

Meanwhile, what do you think of our story? Head to our Facebook page @EntertainmentDailyFix and tell us.

In For A Penny mental health Stephen Mulhern