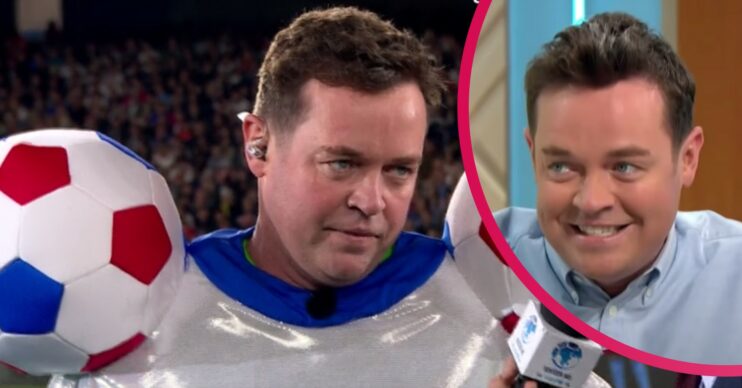 The memes about Stephen Mulhern on Soccer Aid are unfathomably brutal!

Stephen Mulhern was unveiled as The Masked Winger during Soccer Aid 2021 – but viewers were not pleased to see him.

The gameshow host, 44, made a brief cameo on the pitch last night (September 4) for the ITV fundraiser.

Stephen revealed himself as the famous face dressed up in a ‘whistle’ costume, which included a football on each shoulder and oversized boots.

But while some Saturday night viewers were pleased to see the entertainer on the box, many more on social media seemed to lay into his inclusion.

Indeed, his presence was pilloried as ’embarrassing’ by many onlookers watching the exhibition that featured many former football pros.

What did Stephen Mulhern do during Soccer Aid 2021?

After his big reveal at the start of the charity game’s second half, Stephen stayed on the pitch for a bit of a kickabout.

He seemed to have trouble running around due to his ridiculous boots. Not that it mattered – England legend Paul Scholes chose not to bring Stephen into the game by not passing to him.

But Stephen still managed to see some action. He picked up a yellow card for gracelessly smashing into ex Manchester United star Darren Fletcher.

Just moments later he was carried off the pitch by ex TOWIE cast member Mark Wright.

How did Soccer Aid viewers react?

Twitter users piled in on every aspect of Stephen’s appearance and involvement in the game.

An avalanche of sarcastic and blistering criticism was sent his way, including claims about how fans find him annoying, unfunny and completely unsuitable for the charity match.

“Stephen Mulhern… embarrassing turned it into a bit of a farce really #socceraid,” blasted one social media user.

“Stephen mulhern as The Masked Winger was such a let down. LMAO, why bother? #SoccerAid,” tweeted another.

A third complained: “Stephen Mulhern is the big reveal? That’s the most tinpot thing I’ve ever seen.”

That’s the most tinpot thing I’ve ever seen.

And someone else chuckled: “Omg they’re making Stephen Mulhern play in that costume after the most embarrassing and overhyped reveal in history. SCREAMING #SoccerAid #themaskedwinger.”

Others seemed almost amused at how underwhelmed they were.

When Stephen Mulhern come on in that clown costume #SoccerAid pic.twitter.com/dV6GAzeGGk

Building up the #MaskedWinger only for it to be Stephen Mulhern… pic.twitter.com/4fdRsH8MKf

Omg they’re making Stephen Mulhern play in that costume after the most embarrassing and overhyped reveal in history. SCREAMING in tears 🤣😂🤣🤣 #SoccerAid #themaskedwinger pic.twitter.com/FPXG0Rd5Rn

And another joked about how the football legends involved might feel.

They laughed: “Imagining Roberto Carlos watching Stephen Mulhern and wondering where it all went wrong.”

And another furious viewer really laid into Stephen’s selection.

They wrote: “@itvfootball I really want to express how much I have hated my Stephen Mulhern on Soccer Aid. He has made me not want to donate because of how embarrassing and cringeworthy his performance was. Please do not ever let him play next year because you will lose most watchers.”

What else did fans say?

Others noted Stephen wore an earpiece during his appearance. Could this moment possibly feature as a wind up in another Saturday Night Takeaway series in the future?

“Stephen Mulhern is wearing an earpiece. Would this have anything to do with Ant and Dec? #SoccerAid,” one tweeter speculated.

There were, however, a few tweets from devoted fans who did enjoy seeing him.

“Stephen Mulhern is a national treasure and I won’t be told otherwise #SoccerAid,” one person claimed.

And a third added: “#socceraid2021 I loved Stephen’s part, it was hilarious and brilliant.”

What has Stephen Mulhern said about his Soccer Aid involvement?

Stephen reacted: “It’s the hardest secret I’ve ever had to keep. And as anyone who knows me will tell you, I’m rubbish at keeping secrets!

“Today has been brilliant but also a little strange! I have been walking past people I’ve known for 25 years and haven’t been able to say hello!

Read more: Paddy McGuinness ‘gutted’ as he pulls out of Soccer Aid after suffering injury

“I’m not ashamed to say I was a little nervous walking onto the pitch and taking off the mask. But what an experience!”

The final result saw the England team defeated 3.0 by the Rest of the World XI, with two goals from Kem Cetinay and another from Lee Mack.

Money raised from the match aids UNICEF against COVID by helping to deliver 2 billion vaccines worldwide.