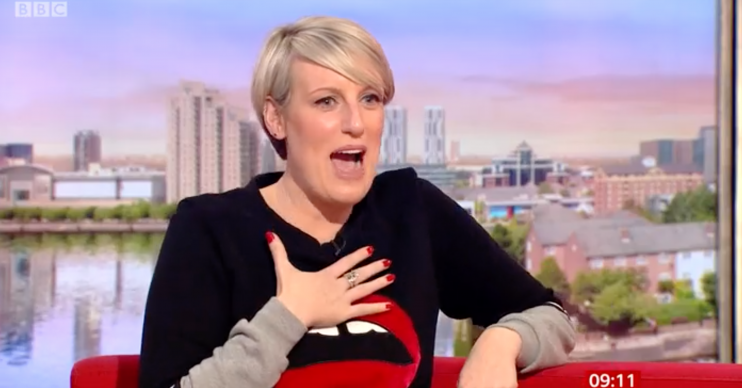 The 37-year-old business presenter popped into the BBC studio as a guest to discuss her new Channel 4 current affairs show – and ended up receiving plenty of warm tributes from long-term colleagues.

Journalist Steph seemed particularly touched to be honoured by former host Bill, 63, who has been battling cancer.

“Ah Bill, I love Bill,” she reacted as presenter Dan Walker revealed he had recorded a video message to wish Steph all the best.

“We always knew you’d have star quality” – Bill Turnbull@billtu pays tribute to @stephbreakfast as she bids farewell to #BBCBreakfast pic.twitter.com/jLzOwn7gAu

Read more: Susanna Reid mocks her own look in throwback picture from 20 years ago

Presenter Dan Walker introduced the short clip: “A familiar face to you and to many, many of our viewers as well, Bill Turnbull wanted to send you this as well.”

We always knew you had star quality.

He went on to recall: “I remember your first day on the sofa, you were such a shy retiring wallflower and you haven’t changed a bit!”

Bill continued, with affection: “We always knew you had star quality, you are going to do great things and I wish you all the very best.”

Mum-of-one Steph – who announced the birth of her baby daughter in November – then shared her own sweet little anecdote from her time working with ex Strictly Come Dancing contestant Bill.

“I remember one of my funniest things with Bill, when I first started we had this row over the word ‘poor’, how to say it,” she revealed.

“He was like: ‘I know you’ve got an accent but maybe you should say ‘poor’ [pronounced ‘paw’, rather than ‘poo-er’] like we say it.’

“[And I said] I’m absolutely not saying ‘paw’ because I’ll never be allowed back in Middlesborough again!”

She explained: “You know, in the lovely way he said it… he was so kind to me at the beginning.”

Today @stephbreakfast says her farewell to #BBCBreakfast as she tells us about her new show #EasyWaysToLiveWell
Here are some of Steph’s best moments ⬇️ pic.twitter.com/Ub9hXgFD9f

BBC Breakfast airs every day at 6am on BBC One.