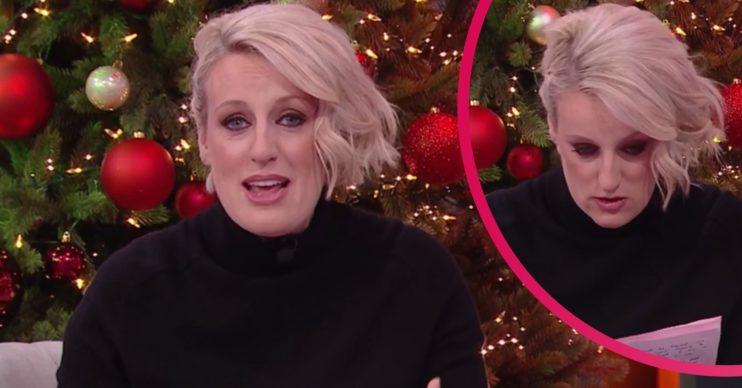 "It's not about me, I'll stop," she told herself

Steph McGovern choked back tears on her show as she read a heartbreaking letter from a desperate mum today (Thursday, December 10).

The TV presenter had to compose herself on a couple of occasions as she revealed the distressing details on Steph’s Packed Lunch.

“It’s not about me, I’ll stop,” she told herself as she told about how a single parent was worrying about Christmas.

The mum-of-three explained in her letter how she lost her job during the first lockdown.

She also said she’d come to rely on food banks and charity – even if those helping her weren’t aware.

I cannot begin to explain how difficult life is financially.

In a sad moment, Steph read aloud how the mum had resorted to retrieving out-of-date food from the bins of family and friends.

“I cannot begin to explain how difficult life is financially,” the mum wrote.

“I always manage to provide food and heating for the children but most days I do not eat and sit in the dark and cold after they have gone to bed.”

She continued: “I am totally ashamed that I have fallen so far.”

Ultimately, the mum – who specified she did not want to be traced – asked for advice how to prepare a festive dinner and evening meal on a budget of £20.

However, she also noted she had no idea what might be coming from the food bank.

She went on to add her family have been making Christmas decorations from toilet rolls, tin foil and items from discount shops.

“I can’t begin to explain what a failure I feel and how I have let my children down,” the letter went on.

“I am an intelligent woman but without work I am nothing.”

A visibly moved Steph stressed the letter’s writer was not a failure – and was glad she was not in debt.

She had tweeted the letter out to her followers last night and promised to address it on her Channel 4 show.

A timely reminder of why it’s vital to donate to food banks if you can. 👇

Because of this letter, tomorrow on the show we’ll be making Christmas dinner for the family for a tenner with our chef @clodaghmckenna

Steph also recommended the mum consult the Citizen’s Advice Bureau after show guest Alan Johnson suggested she may not be familiar with how she may be assisted by Universal Credit.

The host then revealed that chef Clodagh McKenna had worked out how to do Christmas dinner relatively inexpensively.

And impressively, Clodagh suggested that using a turkey leg – rather than a whole turkey – alongside sides like spiced red cabbage might be a solution to feed four people for about £10.50.

Clodagh said directly to the letter’s writer: “Thank you to her for being so brave.”

Viewers were incredibly touched by the letter, with many asking how they could donate to the letter’s writer.

“That letter was so emotional and powerful. Full credit to you and your team for making this a talking point,” tweeted one person watching at home.

“Such an emotional letter. This lady has not let her family down,” wrote another person.

Steph shares the heartbreaking letter from a viewer who got in touch to say how tight money is since losing her job in the first lockdown and how she struggles to feed her kids.@StephLunch #PackedLunchC4 pic.twitter.com/G4khbkN7tw

And someone else added: “So many folk in the same boat. Quietly going under the radar while we watch all these happy, fabulous Christmas adverts. I hope the lady and her kids do okay.”