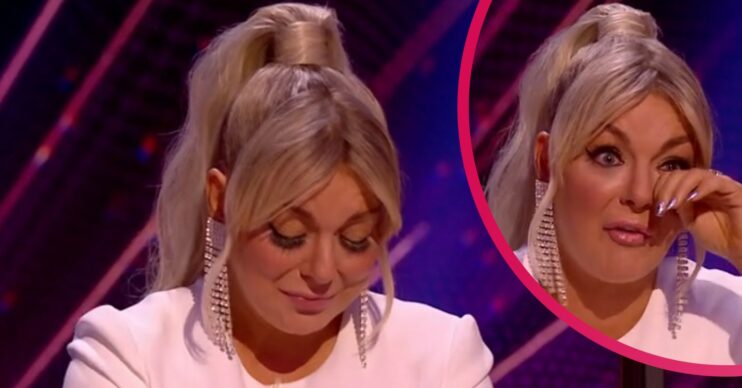 She was upset over the late Amy Winehouse

As three ladies lined up to be Amy Winehouse, judge Sheridan wiped away a tear talking about the late singer.

But those watching at home are getting a bit fed up of her crying every week.

And it was the Amy acts that Sheridan had wiping away the tears.

After they had performed her iconic hit Rehab, host Olly Murs threw straight to Sheridan stating she was a friend of Amy’s.

“I did know Amy,” Sheridan said as her voice broke and she wiped away a tear.

“She was so much more than the beehive and the tattoos, she was a beautiful soul.”

Viewers weren’t impressed by Sheridan given she sheds a tear almost every week.

One wrote: “For [bleep] sake is Sheridan crying again?”

god sheridan needs to stop crying at almost every song on this show. it’s embarrassing 🙄 #Starstruck

Oh god Sheridan Smith why are you crying and why are you acting like you and Amy were bezzie mates?! #starstruck

Why is Sheridan crying? I don’t understand? #Starstruck

Does sheridan smith ever not cry? #Starstruck

Sheridan’s tears for her dad

It’s not the first time Sheridan has become tearful on the show.

After a performance by a group of Celine Dion superfans in February, Sheridan gave her critique.

“I was so spellbound by you girls,” she said.

“Esther and Frankie smashed it out of the park. I loved all of the moves. Celine is dramatic and I love that about her, you nailed it.”

But she then singled out the third performer: “And Kayla, now I’ve got to not cry when I tell you this.”

Sheridan proceeded to open up about her dad’s death.

“I lost my dad and I stopped acting because of it. You keep doing what you love because you will have made him so proud tonight.”