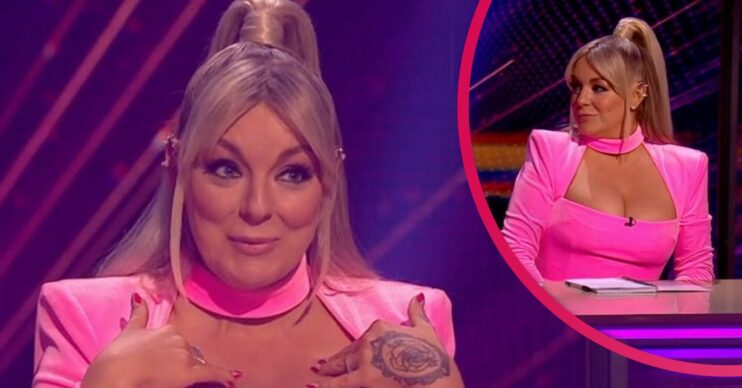 Sheridan Smith caught the attention of Starstruck viewers last night with her outfit on the show.

The No Return actress was back on the programme’s judging panel for another episode.

However, Sheridan‘s bright pink dress distracted many watching as one viewer insisted she had ‘stolen the show’!

The actress was wearing a lowcut pink dress, which featured a cut out in the chest area.

Sheridan also wore her blonde hair up in a high ponytail to complete the daring look.

Within minutes of the show starting, viewers flocked to Twitter to share their thoughts on Sheridan’s look.

Some worried Sheridan was going to “fall out” of her risqué dress.

One person said: “Sheridan Smith gonna fall out of that [dress] soon.”

Another wrote: “Sheridan’s cleavage stealing the show tonight! If you’ve got it, flaunt it!! #Starstruck.”

Meanwhile, during last night’s show, Sheridan was left in tears over one performance.

A group of John Legend tributes performed the singer’s hit track All Of Me.

After tearing up, Sheridan told the singers: “It’s one of my favourite songs, the lyric, ‘All your curves and all your edges, all your perfect imperfections’, it gets me every time.

What did Sheridan say?

“And you just delivered it so well guys.

“There were no gimmicks, no other stuff, it was just you guys and then the rose petals started [falling] and then I was completely gone.”

She added: “I was completely transported somewhere then. And yeah, you really got me.”

Viewers also felt emotional after the performance, as one said: “#teamlegend had me in tears ngl – powerful stuff.”

Another added: “#Starstruck team legend should get together and do something as a group away after the show.”