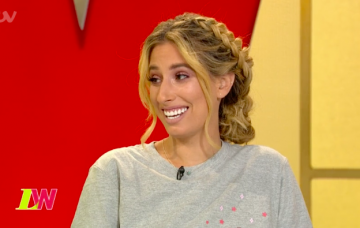 They both wear it so well

It looks like rainbows are the new unicorns when it comes to novelty jumpers, after ITV stars Stacey Solomon and Lorraine Kelly both wore the same top on air in the same week.

And Lorraine, 58, wore the exact same jumper for her live show on Tuesday.

Kate pointed out: “There’s pots of gold at the end of that rainbow, Lorraine! Which we want to be careful of.”

Lorraine covered her chest with her hands and Kate, 50, added: “Wow, what am I doing? It’s all breasts with me this morning!”

Another wrote: “That’s Lorraine Kelly, me and Stacey all with the same top!”

A third insisted they were first to the fashion, writing: “I wore it first, I’m such a trend setter”.

The jumper, from Oasis Stores, is apparently sold out, no doubt thanks to the TV stars.

It came after the I’m A Celeb winner took to Instagram to share her horror at having “Rapunzel” hair on her, er, toes…

In the video, posted in InstaStories, Stacey, who has been dating actor Joe Swash for two years, showed off her freshly painted toe nails.

She said: “So, in the light that someone may see my feet tomorrow, I went and got a pedicure, and then got home and realised there was one more thing I had to do before anyone can see my feet.”

The hilarious X Factor finalist continued in another video: “I mean why oh why oh why would anyone give me toe hair like Rapunzel, and eyelashes that don’t exist? I mean it’s either hair or no hair. You’re either hairy or not hairy!”

She then added: “How could I be so hairy in places like my nose, toes and upper lip, and have stub hairs in the places that I want them?? WHY?”

It’s a great question, Stace, but not one we can help you with.

Read more: Loose Women’s Linda Robson got Ant McPartlin’s name wrong as she reveals he walked in on her changing!

Will you be dashing off to get your rainbow jumper immediately? Leave us a comment on our Facebook page @EntertainmentDailyFix and let us know what you think!