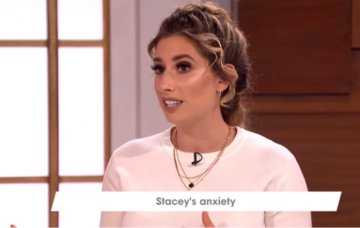 She said it often strikes at night time

Stacey Solomon has revealed her anxiety can get so bad, she sometimes struggles to breathe.

Speaking to her fellow Loose Women panellists Kaye Adams, Kelly Brook and Janet Street Porter, she said: “I get anxiety from time to time and I had a wave of anxiety last night.

“It’s something that bubbles up inside of me and I know is a part of me. I’ve stopped trying to fight against it as such.”

The 28-year-old mother-of-two said she is learning how to deal with her anxiety.

“I am quite good at managing how it manifest itself,” she explained. “It probably gets worse at night time when I have more time to sit and think about it,” she said.

Janet said she understood as she often feels the same way. Her advice was to keep a notepad and pen by the bed and write down any anxieties before going to sleep.

“When I read it in the morning, I realise it’s all stupid,” she said.

Stacey agreed and said her anxiety often begins over something trivial and then snowballs.

She said: “It can be really menial things for me, like my fridge cabinet not being organised, but I could be thinking about that all day. Eventually that will mount up to ‘that’s not organised, my children aren’t organised, my life isn’t organised, who am I? what am I doing?’ It gets worse to the point where you feel like you can’t breathe.”

The discussion arose after the former X Factor star shared a tweet on Tuesday night in which she said was feeling anxious.

“Oh hi anxiety,” she wrote with a waving hand emoji.

Stacey explained of the tweet: “Instead of fighting it, I now think ‘hello, here you are, I’m going to ride it out as I know you’ll be over soon’. I have to accept it’s part of my personality rather than something I have to get rid of because I can’t.”

Her tweet led to hundreds of her fans getting in touch to offer their support and tips, with some sending funny GIFs in the hope they would cheer Stacey up.

Jeff Brazier told her: “Here to discuss that horrible little word beginning with A whenever you like Stace.”

Meanwhile The X Factor’s Talia Dean sympathised saying: “I’m not sure why but anxiety is so high in people this month. Mine’s awful, can’t sleep at all. I think it’s the darkness.”

Stacey later responded to thank everyone for their support.

She wrote: “Soooo many lovely comments on here! Thank you! After posting I headed straight for the lavender spray and Sudoku. Love you all and taking deep breaths for those struggling with the big A.”