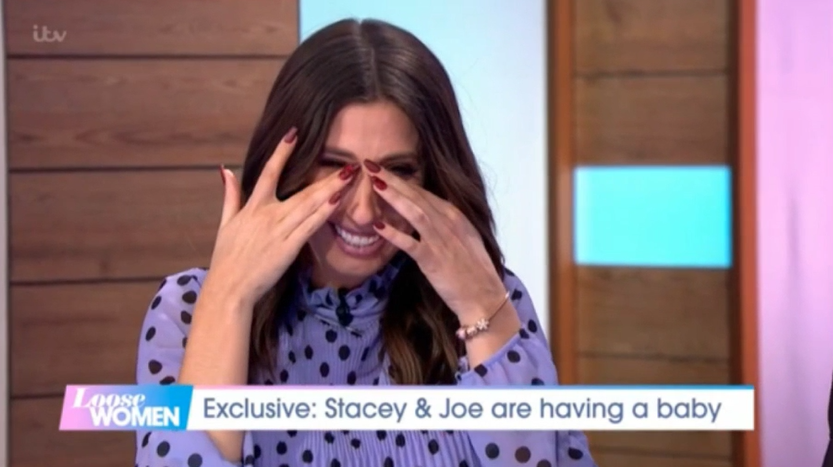 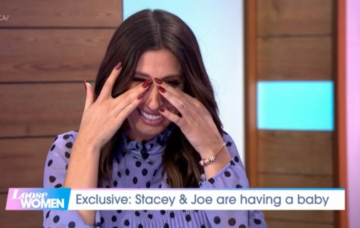 They are expecting their first baby together

Stacey Solomon was overcome with emotion as she opened up about having her first child with boyfriend Joe Swash.

Former EastEnders actor Joe appeared on Loose Women alongside Stacey and said he thinks the new addition will seal the bond the couple have with his son Harry, 11, and the presenter’s two kids Zachary, 10, and Leighton, six.

Stacey said: “We felt it was important to keep it to ourselves until we felt really safe.

“We didn’t find out until a certain point then we had to let our family and children know and then even though, you know, it’s the right time but you think ‘I do want it to be just us for a while longer.’

“I’m so elated and excited and we really can’t believe we’ve been privileged to be able to have another baby.”

‘I’m so elated and excited’ – @StaceySolomon is talking about her baby news. Huge congratulations to you and @realjoeswash 💛💛💛💛 #LooseWomen pic.twitter.com/qt5x5ax261

Meanwhile, Joe said: “We’ve both got children, two different lives going on sometimes so this child is going to tie up the family, my kid and yours are going to feel like part of a big family, it’s such a lovely family,we look after them now and they can look after us later.”

The couple announced their happy news on Instagram on Friday (22.02.19) and admitted they’re relieved the secret is finally out.

Joe added: “It’s brilliant, I’m really chuffed, it’s nice to have the secret out. We’re so excited. We’ve had to keep undercover so its nice we can breathe a little bit and let people know.”

However, the 37-year-old star admitted his 29-year-old girlfriend hadn’t stuck to their pact not to tell people about her pregnancy at first.

He said: “She put down the ground rules really early about what I could say but I bumped into Alison Hammond and she fave me a hug and said ‘Congratulations’, so she’s been telling everybody.

“I’ve told a few people that I know but I kept a secret a lot better.”

Joe announced the news in a very lengthy post on his social media accounts, with Stacey simply retweeting his messages because “words weren’t working” for her.

Have been driving myself mad thinking that she’s bored senseless of me and can’t stand to be awake for longer than 10 minutes of my company… So you can imagine my delight to find out that she still loves me and my company very much she’s just been growing a baby. I can’t begin to describe how happy we are to be able to share this wonderful news. We’ve been so blessed with 3 incredible children that we’ve had the privilege of raising and we are forever grateful to have the chance to become parents to another wonderful child. It’s all very overwhelming and emotional and we couldn’t be happier right now.

However, she admitted on the show: “I don’t know what to do, it was a long time ago.