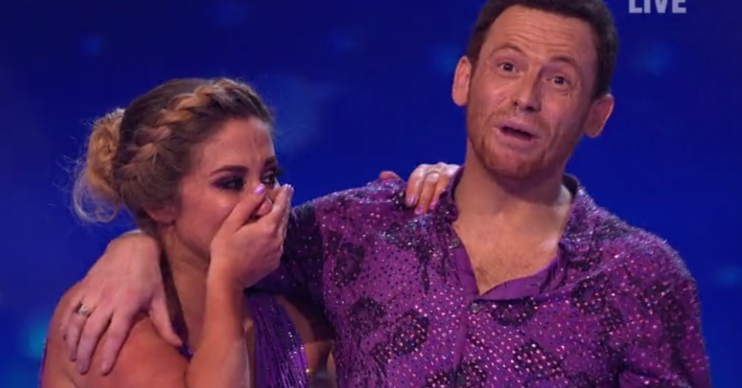 She was in the studio audience with baby Rex

A delighted Stacey Solomon was left open-mouthed with joy and surprise last night sitting in the studio audience as her man Joe Swash claimed the Dancing On Ice trophy.

The Loose Women star, 30, hugged baby Rex as his dad and her stunned boyfriend was announced as the series winner alongside his DOI skating partner Alex Murphy on the rink.

They beat Diversity star Perri Kiely and Vanessa Bauer in a public vote that host Phillip Schofield described as being “very close”.

And Stacey made sure to acknowledge just how excellently Perri – as well as other celebrity finalist, Paralympian Libby Clegg – performed on the night by hailing all of the stars before fizzing with excitement over Joe’s achievement.

She wrote on Twitter: “Firstly, EVERYONE in the final tonight was AMAZING & deserved that trophy. Secondly, Joe we‘re all so immensely proud of you.”

Thanking fans, Stacey continued: “To anyone who voted, thank you from the bottom of our hearts. He put his heart & soul into DOI & has LOVED every minute. It meant the world to him. So thank you.”

He put his heart & soul into DOI & has LOVED every minute.

Instagram fan Stacey later also posted tributes on her Stories account, thanking supporters once again for backing Joe on his journey from someone with barely any experience on the ice to taking the whole series.

She said: “I really wanna say thank you by the way, not just to people who have voted just thank you to anyone who has ever been nice, kind and supported someone and built them up, you have no idea what difference that makes to somebody.”

Using her nickname for Joe, she added she was still shocked by the result.

“EVERYONE in that final deserved to win so it’s hard to believe Hoe done it.

“We are so proud and happy for him, we love you to the moon back @realjoeswashy.”

Joe looked to be gobsmacked when he was declared the winner, with his jaw dropping open and his eyes opening wide.

And partner Alex almost dropped to her knees before she righted herself and embraced Joe.

An overwhelmed but over the moon Joe managed to get out: “Honestly, this has been the most amazing experience and to share it with Alex…”

Runner-up Perri posted after the show that he was “proud” of Joe and praised him as a ‘genuine friend’.