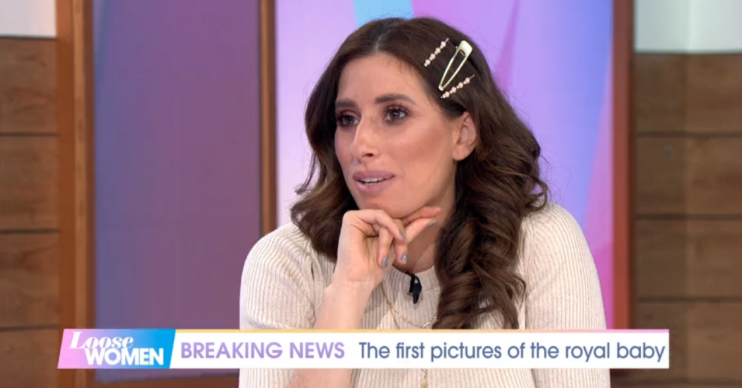 Sounds like Stacey wants plenty of attention when she gives birth

Loose Women’s Stacey Solomon confessed to feeling “jealous” after the royal baby was shown off to the watching eyes of the world earlier this afternoon.

Today’s ITV lunchtime show was interrupted by a special bulletin from the tot’s first photo call at St George’s Hall at Windsor Castle with his parents the Duke and Duchess of Sussex.

Proud mum Meghan Markle praised the newborn boy as a “dream” as dad Prince Harry cradled him in his arms.

“Parenting is amazing,” Harry told reporters. “We’re just so thrilled to have our own bundle of joy.”

Loose Women’s panellists were very much feeling the outpouring of love shown by royal fans to the new parents, with Saira Khan almost being moved to tears as she reflected on her own experiences as a mother.

“I just felt so much emotion, it brought back all those feelings,” she said.

Stacey, too, was touched deeply by the footage of the Sussex baby, gushing: “It’s such a wonderful thing isn’t it? A baby. It makes me a bit jealous!”

Reminded she will also be welcoming a new child into the world very soon, the pregnant former X Factor star joked she wanted just as much ceremony laid on to announce the arrival of her own baby.

Referring to partner Joe Swash, she smiled: “I’m going to say to [him]: ‘Can we walk out of a castle like that?'”

Laughing, host Andrea McLean asked Stacey whether she wanted the same kind of attention that Meghan and Harry enjoyed.

“Shall we pause the programme so we can go live to wherever you are?” she enquired.

But Stacey insisted she would most definitely not be appearing on telly around that time.