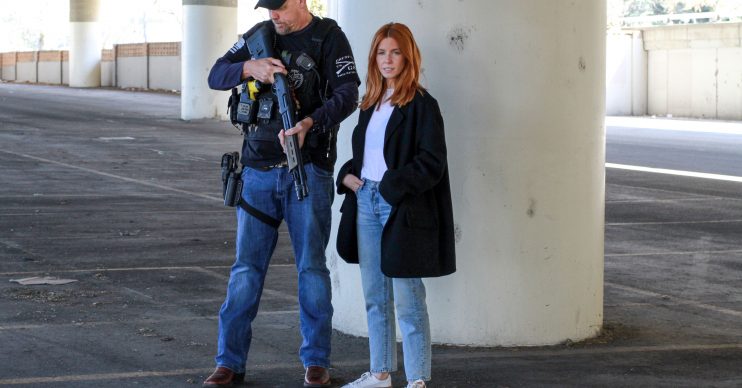 Stacey Dooley’s latest documentary has been removed from the schedules by the BBC, in a bid to avoid controversy.

The Strictly Come Dancing winner, 32, returned to the BBC this month with a series of hard-hitting factual reports, entitled Stacey Dooley Investigates.

These included Nigeria’s Female Suicide Bombers, which is due to air next week (August 14).

However, Face To Face With The Arms Dealers, has been hurriedly dropped from the schedules due to the current climate in the US.

The investigation into the US gun trade has been shelved because of the recent shootings in Texas and Ohio, which left 31 dead in two separate incidents.

According to the BBC website, Stacey travelled to America where she met a family from Arkansas who sell weapons to over 100 countries.

She also shoots one of the world’s most powerful sniper rifles.

In a statement published in the Express.co.uk, a BBC representative explained: “In light of the recent events in the US, we felt it was appropriate to postpone the documentary about Arms Dealers on BBC Three because the subject matter discusses the controversial gun trade and features firearms. We will confirm the date of broadcast shortly.”

The news comes in the same week the BBC was forced to apologise for an embarrassing inaccuracy in a Panorama, fronted by Stacey.

The channel had to re-edit the documentary, after Stacey described an Islamic prayer gesture as “an IS salute” – prompting complaints.

The TV presenter made the remark about a group of Muslim women pointing at the sky when she spent time at a Syrian ­refugee camp for Panorama: Stacey Meets the IS Brides.

In a voiceover, she said: “As we left the camp, we saw women raising their index finger in an IS salute.”

However, BBC journalist Anisa Subedar said Stacey had made a “insulting and offensive” error in assuming anyone who raises their index finger is a terrorist.

The error featured in the trailer for the show, and was quickly edited out before the show aired.

Sunday night’s News At Ten bulletin, which showed the trailer, was also removed from iPlayer.

A representative for the channel defended Stacey, saying: “It’s disappointing that criticism has focused on Stacey; every programme is a team effort, so the mistake wasn’t her responsibility.

“Stacey’s a fantastic and experienced filmmaker who brings new audiences to hard-hitting and sensitive documentaries.

“As we made clear yesterday, the BBC made a mistake by not pointing out the wider context of a gesture which has been adopted by IS for propaganda purposes, and we apologised.”

Last year, Stacey was caught up in a Comic Relief row, when MP David Lammy accused her of being a “white saviour” and perpetuating “tired and unhelpful stereotypes” after she spent time in a village in Uganda for the charity.

Stacey has made more than 70 documentaries for BBC3, tackling subjects such as mass rape and murder, paedophiles, child soldiers and the crystal meth industry in Mexico.

Are you a fan of Stacey Dooley? Leave us a comment on our Facebook page @EntertainmentDailyFix and let us know what you think!