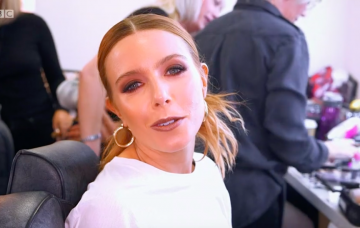 The presenter has annoyed some people backstage, a report claims

She’s always seemed like the most down-to-earth and relatable of this year’s Strictly Come Dancing contestants, but a new report has called Stacey Dooley a “massive diva”.

It’s claimed the BBC3 presenter “demanded” backstage crew go out and buy her a new outfit when she arrived at an interview in a tracksuit.

A ‘source’ told The Sun: “Stacey turned up for an appearance on Chris Evans’ Breakfast Show at eight in the morning but hadn’t brought anything glamorous to wear as asked by bosses.

“She ordered staff to go out and buy her an outfit but nothing was open that early so she had to go on stage after the radio appearance in her tracksuit.”

The source added: “Over the past few weeks Stacey has been quite difficult and it has resulted in crew being put off her.

“Some of them are quite glad that this weekend will be the last time they have to work with her.”

ED! has contacted Stacey’s representative for comment and she hasn’t yet made any statement about the story on social media.

But her professional dance partner Kevin Clifton seemed keen to refute any “diva” allegations as he retweeted a fan who called Stacey “the most normal, down to earth, have a go fantastic woman that you would love to have as your mate.” He added: “She’s absolutely all of those things😀.”

It’s been an emotional series for Stacey, 31, and Kevin, 35, who have become viewer favourites.

The pair have endured headlines accusing judges of favouritism towards them, as the BBC prepared Stacey for a huge career on their channel.

There was more confusion when fans wondered how the final four were “predicted” a month ago.

The dancing pair were also caught up in the Strictly Curse when it was wrongly claimed that Stacey’s boyfriend, Sam Tucknott – who she’s been dating for three years – was “insanely jealous” about their closeness.

But now they’ve reached the final four, and celebrated with gushing tributes on social media.

Little bit emotional. I’m so grateful and have loved every second. Thank you @StaceyDooley . Let’s have a great time in the final and give everything we’ve got one last time❤️ pic.twitter.com/a53mp6LlzD

On Friday evening, Kevin wrote: “Little bit emotional. I’m so grateful and have loved every second. Thank you @StaceyDooley . Let’s have a great time in the final and give everything we’ve got one last time❤️.”

Who do you think should win Strictly? Leave us a comment on our Facebook page @EntertainmentDailyFix and let us know what you think.