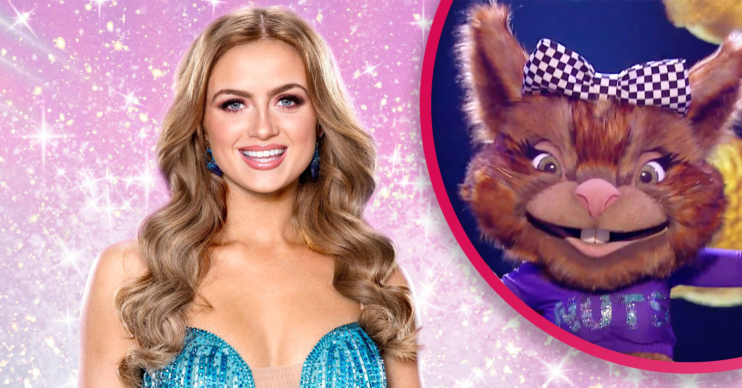 Squirrel on The Masked Dancer to be unveiled as Maisie Smith, viewers predict

Well, she's certainly got some moves…

Fans of The Masked Dancer are convinced EastEnders actress Maisie Smith is behind the mask of Squirrel.

Maisie uploaded a picture of herself wearing an animal-print dress in what looked to be a dressing room.

And eagle-eyed fans have said the picture gives away a huge clue that suggests she is Squirrel.

Is Maisie Smith Squirrel on The Masked Dancer?

After making the Strictly Come Dancing 2020 final, Maisie can most certainly move – much like Squirrel on the ITV show.

Read more: The Masked Dancer viewers are baffled as Rubber Chicken is unveiled

She’s showed off her impressive footwork to Shake it Off and Single Ladies (Put a Ring on it) – but is Maisie hiding under the furry mask and bushy tail?

Well, The Masked Dancer fans certainly seem to think so.

Why do fans think Maisie is Squirrel?

Dancing prowess aside, fans spotted a clue in a picture Maisie uploaded to Instagram.

In the picture she’s wearing a headset microphone.

Read more: Is The Masked Dancer’s Llama a Line of Duty star?

And, we have to admit, it looks pretty much identical to the ones the unmasked contestants have been wearing.

Just take a look at Louise Redknapp and you’ll see what we mean!

Posting to Instagram, Maisie made reference to her tiger-print dress and said: “Grr.”

However, a tiger wasn’t the animal many think Maisie is pretending to be.

“Do squirrels grrr?” asked another.

“You can even see her mic, it’s the same all the others that have been de-masked have had!” declared a third.

You can even see her mic, it’s the same all the others that have been de-masked have had!

“Is that you on The Masked Dancer?” asked another, adding a squirrel emoji.

“Are you the Squirrel on Masked Dancer hun,” asked another.

Do any of The Masked Dancer clues tally up?

So far Squirrel’s clues have included her having “street cred” and also being “TV royalty from an early age”.

Of course, this could refer to Maisie first being on EastEnders as a little girl.

She also said it was: “Time for this lady to, style it out, on the dance floor.”

And this could be a nod to her time on Strictly.

The Masked Dancer airs on ITV every night at 7.30pm, with the final airing on Saturday (June 5).

So do you think Maisie is behind Squirrel’s mask? Tell us on our Facebook page @EntertainmentDailyFix.