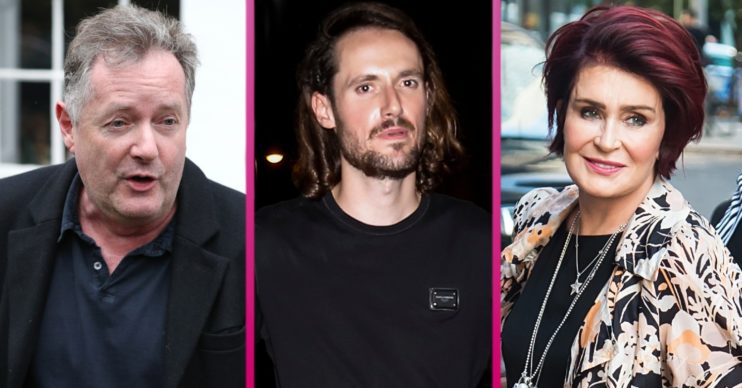 Spencer Morgan has taken to Instagram to hit out at ‘cancel culture’ in defence of his dad Piers and pal Sharon Osbourne.

The eldest child of Piers Morgan, Spencer, 27, paid tribute to both Piers, 55, and Sharon, 68, on social media.

On social media, the sports reporter shared a snap of himself with Sharon and his brothers Albert and Stanley.

He then praised the reality star and presenter  for her kindness and fumed at her being let go from her job at CBS.

Spencer wrote: “Of all the ‘celebrities’ I’ve got to know, this lady is easily one of the kindest.

“She loses her job now for spitting facts in defence of @piersmorgan, but history will remember her so well for it. Thank you Sharon. Respect.”

Finally he hit out with: “And [bleep] cancel culture gimps, real people are sick of you.”

History will remember her so well for it. Thank you Sharon.

This all comes in the wake of Piers stepping down from Good Morning Britain.

The former GMB host left after he accused Meghan Markle of lying during her Oprah Winfrey interview.

Subsequently, Sharon Osbourne defended Piers on the US show The Talk.

However, this led to a heated debate with her fellow panellists.

The Talk then went off the air for a week and Sharon has reportedly been fired.

While it remains unconfirmed what Sharon’s next career move will be, Piers has repeatedly defended the star.

Over on Twitter, he fumed: “What’s happened to ⁦@MrsSOsbourne is an absolute disgrace that shames CBS.

“Bullied out of her job for defending me against an invented slur of racism because I don’t believe a liar.”

Meanwhile, in his Mail on Sunday article, he claimed that trolls threatened to murder his eldest son.

He wrote: “My three sons told me they too are all being targeted, and sent me screenshots of venomous abuse and threats of violence towards them, which made my stomach churn, especially as police are already investigating a death threat made to me and my eldest boy Spencer last month.”

Do you agree with Spencer? Let us know on our Facebook page @EntertainmentDailyFix.s