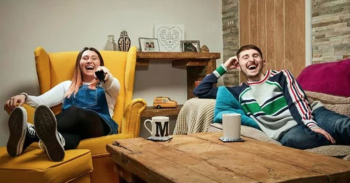 Pete showed a bit too much

Gogglebox star Sophie Sandiford has joked that her brother’s recent dress-up on the show has left her with nightmares.

Read more: Christine McGuinness shares cute pic of all three of her children ahead of big event

A few minutes into the episode, Pete let his sister know what he was planning for his weekend.

“You’ll never guess what I’m doing at the weekend…” he said. “I’m going to a pub crawl… it’s fancy dress.

“The lads are going dressed up as girls, so I thought hang on a minute, why don’t I go dressed as Kylie?”

He joked that he had the right figure to pay tribute to the singer.

Pete then showed off his costume – which included a pair of denim hot pants – entering the room backwards because he was worried about revealing “a bit too much”.

He got a bit worried about whether he could wear the shorts on his night out, and Sophie suggested he should give them a miss, saying: “I saw a quarter of a cheek and I feel sick.”

One fan reacted to the scene, saying he might find it hard to sleep after the show.

“I won’t sleep for weeks you [bleeps] after that Kylie impression,” he said.

The sibling pair have been popular with the Gogglebox audience since joining the show last year.