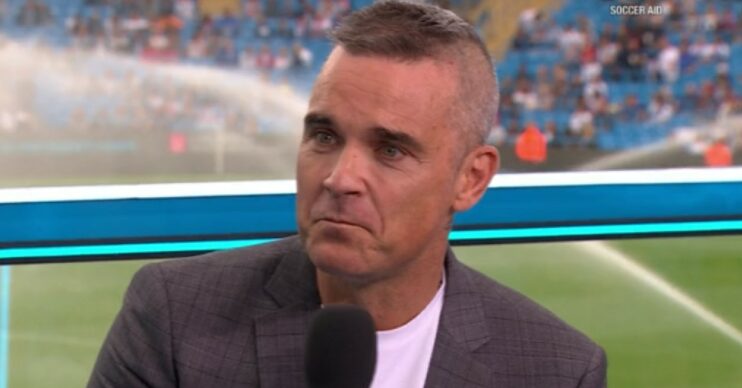 The singer created Soccer Aid in 2006

The musician, who initiated Soccer Aid in 2006, made brief cameos throughout the show at the Etihad Stadium in Manchester.

But it was his appearance that really took fans by surprise.

Robbie, 47, appeared at various points throughout the game.

He firstly chatted to presenter Dermot O’Leary ahead of the match.

Opening up on incredible fundraiser, he shared: “I can’t believe it’s gone on this far and we’ve raised that much money. It’s unbelievable.

Read more: Paddy McGuinness ‘gutted’ as he pulls out of Soccer Aid after suffering injury

“I think we raised £9.7 million last time and tonight we’re going to beat that. Fingers crossed!”

Meanwhile, later on, Robbie appeared on the pitch alongside Alex Scott, Julie Murray and Joel Dommett.

But according to some, the singer looked totally different.

COME ON ENGLAND! Please tune in and help support children around the world > https://t.co/aejNlBBFUH pic.twitter.com/ClR2jCsty1

On Twitter, one said: “I didn’t recognise Robbie Williams.”

However, one appeared to love Robbie’s look.

They shared: “You age like a fine wine! Come on England.”

What happened during Soccer Aid?

After an entertaining 90 minutes, the Rest of the World XI beat England 3-0.

Following the match, Robbie penned: “That was an incredible @socceraid for @unicef_uk and felt amazing to be back! Congratulations to the Soccer Aid World XI.

“Thanks to your support, tonight’s #SoccerAid for @unicef_uk made history and raised £13,014,769 which is more than ever before!”