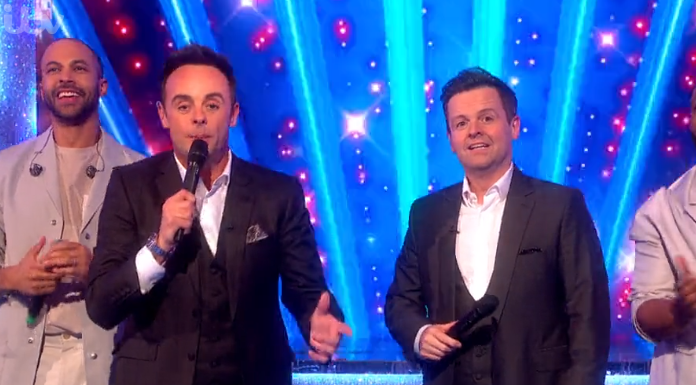 The presenters played a trick on Bradley 15 years ago

Fans of Saturday Night Takeaway are worried the show won’t air next weekend amid the coronavirus.

ITV recently confirmed the series finale in Florida won’t be happening due to the virus – which has killed more than 5,000 people worldwide and 22 in the UK.

At the end of Saturday night’s show (March 14), host Dec Donnelly hinted the programme might not air next weekend.

He said: “We will hopefully be back here next Saturday at 7. Have a great week, stay safe everybody.”

The hosts also revealed that next Saturday’s show (March 21) will see them prank Bradley Walsh.

We will hopefully be back here next Saturday at 7.

Viewers were worried about the show being cancelled, especially as they’ll miss Bradley’s appearance.

“Praying you will be @antanddec, I really want to see that Bradley Walsh Undercover,” said one fan on Twitter.

“OMG I hope next week’s Saturday Night Takeaway is on so I can see the Bradley Walsh prank,” said another.

One person suggested: “Hopefully if next week’s show is cancelled they will put Bradley Walsh’s undercover on their YouTube channel for us to watch!”

The presenters previously tricked The Chase star in 2005, branding him “the angriest celebrity we have ever pranked” after he fumed about them booking him as a speaker for a fake company.

And they have set him up again for what they have dubbed “Bradley Walsh II: The Chase is on.”

The teaser, which aired during the latest installment of Takeaway, shows Ant and Dec get their hands on the top secret questions and answers for an episode of Bradley’s quiz show.

Bradley has no idea that the contestants on The Chase are wearing ear pieces enabling Ant and Dec to feed them the right answers to the tough questions.

Apparently starting to suspect something isn’t right, Bradley mutters: “What the [expletive] is going on with this show?”

Ant and Dec are then seen running off, with Ant shouting: “Quick he’s on to us!”

Fifteen years ago, the pair drew laughs when they went undercover and tricked Bradley into appearing at a fake corporate event.

The TV star became increasingly perplexed at a series of odd goings on, and appeared to be furious when he realised it was all a joke.