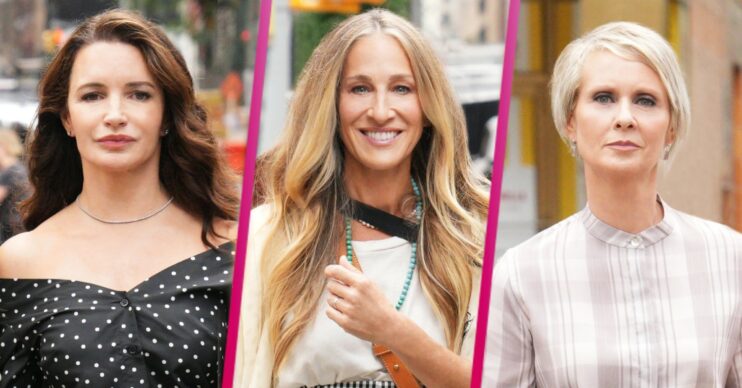 Sky releases first official teaser to Sex and the City’s new series And Just Like That… When does it start?

Carrie Bradshaw is BACK in a new Sex and the City spin-off series called And Just Like That… and Sky has just released a new teaser trailer.

On Friday November 12 2021, Sky released the first official teaser to And Just Like That…

The series is a new chapter of the groundbreaking series Sex and the City, from executive producer Michael Patrick King.

The new teaser trailer of Sex and the City’s brand new spin-off shows the girls doing what they do best – shopping, brunching, mainlining Champagne and gossiping.

“But the truth is, life is full of surprises.”

It’s one of his last TV and film appearances before his tragic death in September 2021.

Sex and the City spin-off – what’s it about?

Sadly the fourth member of the group Samantha Jones will not be popping up in the SATC spin-off.

However, Mr Big WILL be back, as well as several other key characters from the original Sex and the City cast.

Read more: Sex and the City reboot: Everything we know about new episodes

How many episodes is the new series?

Each episode is expected to be an hour long.

We know the first episode of the mini-series is entitled ‘Hello, It’s Me’.

When does And Just Like That… start and how can I watch it?

The 10-episode series will be available from Thursday December 9 2021.

It will stream on Sky Comedy and streaming service NOW.

Sarah Jessica Parker, Cynthia Nixon and Kristin Davies are all reprising their roles as Carrie, Miranda and Charlotte.

However, as many know by now, Kim Cattrall will not be part of the Sex and the City spin-off cast.

Kim had a very public fall out with SATC co-star Sarah Jessica Parker and vowed never to film another episode.

Che will be a non-binary, queer stand-up comedian who will feature Carrie on her podcast.

The late Willie Carson reprised his role as Stanford Blatch in at least one episode.

Sex and the City’s spin-off series And Just Like That… streams from Thursday December 9 2021 on Sky Comedy and NOW.

Are you looking forward to watching the Sex and the City spin-off series? Leave us a comment on our Facebook page @EntertainmentDailyFix.