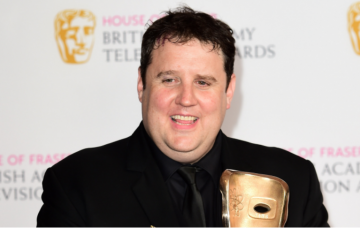 Sky One has offered Peter Kay a role in Brassic

He's a huge fan of the show

Peter Kay has been offered a role in Sky One’s Brassic, the the comedy drama’s writer has revealed.

The 46-year-old comedian is a huge fan of the TV series, which stars Michelle Keegan and Joe Gilgun.

And writer Danny Brocklehurst would love to have him join the comedy in series two.

He told the Daily Star newspaper: “There are so many people it would be good fun to have in.

“I know Peter Kay loved the show’s season one. It’d be amazing if we could get him in it.”

Meanwhile, Peter was recently forced to postpone his Dance For Life tour due to the coronavirus pandemic.

The star was set take his three-hour dance-athons on the road to raise money for Cancer Research UK, but the upcoming dates will not be going ahead as planned.

He said in a statement: “Obviously this is disappointing news but well and truly justified given the circumstances.

I know Peter Kay loved the show’s season one. It’d be amazing if we could get him in it

“We’ll get through this, together and then we’ll all have a great big dance for life. Stay safe and look after yourselves and the people around you.”

Peter was set to perform in Manchester on April 10 and 11, with subsequent shows announced for Liverpool (May 8 and 9) and London (29 and 30).

Read More:Olly Murs shocks fans as he ‘sticks penis in Pringles can to prank girlfriend’

They commented: “Due to the ongoing coronavirus outbreak and following Government advice, it is with deep regret that the forthcoming Peter Kay’s Dance For Life shows are being postponed.

“We are looking to reschedule the shows so please hold onto your tickets as they will be valid for the new dates.

“We apologise for any inconvenience this may cause but the safety of the public is paramount.”

The Phoenix Nights star – who has largely remained out of the spotlight in recent years – had been excited to take part in such a “happy and positive” event.

He previously said: “I’ve honestly never had so much fun as I had working on Dance For Life.

“The atmosphere was so happy and positive; it really is a great way to raise money for the worthiest of causes. All people have to do is turn up and dance.”

But the award-winning comedian has taken an extended break from the spotlight in recent years, after cancelling his 2018 stand-up tour due to “unforeseen family circumstances”.