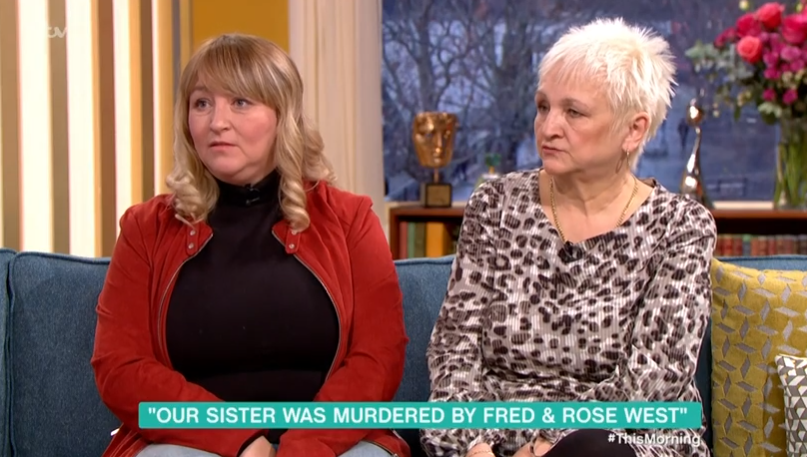 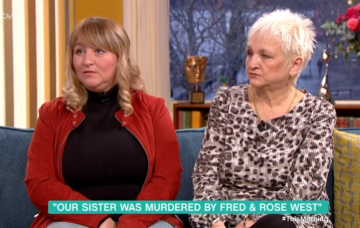 It's their first TV interview since Juanita died

The sisters of Fred and Rose West victim Juanita Mott have spoken out about their sister’s murder for the first time on This Morning, calling for the death penalty for killer Rose.

Ahead of new documentary Fred & Rose West: The Real Story with Trevor McDonald, which was due to air tonight but pulled for legal reasons, Belinda Mott and Mary-Ann Mitchell spoke to Holly Willoughby and Phillip Schofield about the killing that devastated their family.

The Wests were accused of raping, torturing and murdering 12 women between 1967 and 1987, one of them being their own daughter, Heather.

Fred confessed to the murders and was found hanged in his prison cell. It is rumoured Rose, who was convicted of 10 murders and sentenced to life in prison in 1995, is now hoping for release.

She has a fiancee in prison and wants to start a new life with her.

But Juanita’s sisters are determined that will never happen.

When Holly revealed Rose was appealing her sentence and to this day denies any wrong-doing, Belinda said it made her angry and it was a waste of tax payers’ money.

Mary-Ann added: “We go to work and pay our taxes to help keep this country funded – and keep her in the lap of luxury – she gets three square meals a day, a nice warm roof over her head, a comfy bed. There’s people on the streets that deserve more money than she does.

“I’d like to see her rot in hell if I’m perfectly honest. And I hope when her girlfriend gets released from prison it rips Rose’s heart out because she’ll never get out. And if she did I’m sure there’d be a queue waiting.”

Phil asked Belinda if she felt the same and she said: “Yes, that or a very slow electric chair.”

The sisters also said they felt cheated when Fred took his own life: “We didn’t get the justice, yes he would have ended up in prison, but still cheated. But then part of me is glad he’s not on this earth breathing the same air that we are,” Mary-Ann said.

Juanita had gone missing in 1975, but the sisters say it wasn’t unusual for her to disappear for long periods of time and turn back up again.

It was 1978 when they started to worry about her whereabouts. They believe Juanita may have been lodging with the Wests.

In fact, Belinda visited the house, dubbed the house of horrors after the bodies of all their victims were discovered, to see a friend there.

She told how Rose was waiting on the street and said she was a “loose” woman and that Fred was “creepy”.

Phil asked if they thought Fred and Rose were clever to have got away with it for so long, Mary-Ann replied: “They weren’t clever, they’re not intelligent enough to be clever, it was pure luck.”

Holly asked them about dealing with their grief all these years and picking up the pieces after it was confirmed Juanita was one of the Wests’ victims.

Mary-Ann said: “It’s what we’re used to now it’s part of our lives. The worst part is our children our grandchildren won’t ever get to meet their aunty. Her memory is kept alive through photographs, but we’ve learnt not to live with it, but to just plod on.”

As Belinda said the family were “destroyed” by it, Mary-Ann added: “Mum refused to believe that it was her [Juanita] to the day she died.”

Fred & Rose West: The Real Story with Trevor McDonald will now appear on ITV at a later date.