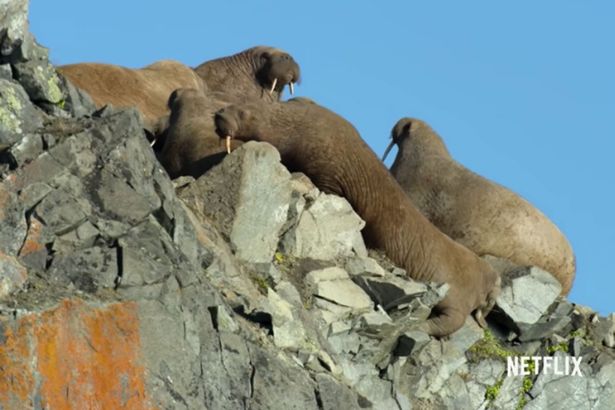 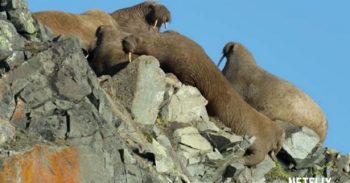 Viewers were deeply moved by Sir David Attenborough’s Our Planet on Netflix.

But the documentary has now been accused of misleading people over the plight of the walrus (collectively).

In one particular scene, hundreds of walruses were scene diving from the edge of a cliff and falling to their deaths.

The film claimed the tragic incident was a result of global warming melting the sea ice and driving the creatures to their untimely demise.

However, a zoologist has now suggested the show is “spinning a bogus tale”, and the walruses were actually chased off by polar bears.

Dr Susan Crockford, an adjunct assistant professor at the University of Victoria, Canada, wrote on her website: “More walruses are hauling out and dying from falls and trampling because they are more abundant now than they have been in a century.”

“Our Planet producers are spinning a bogus tale to promote an agenda using deliberately misleading footage and commentary.”

She continued on her website: “The lie being told by Attenborough and the film crew is that 200-300 walruses fell during the time they were filming, while in fact they filmed only a few.

“Polar bears were responsible for the majority of the carcasses shown on the beach below the cliff.”

“This is, of course, in addition to the bigger lie that lack of sea ice is to blame for walrus herds being on shore in the first place.”

Sir David has been a long-time campaigning for protecting the planet.

Ent Daily has contacted Netflix for a comment on Dr Crockford’s accusations.

Did you watch the documentary? Leave us a comment on our Facebook page @EntertainmentDailyFix and let us know what you think of this story.