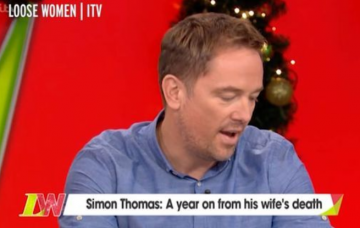 He appeared on today's Loose Women

Sky Sports host Simon Thomas has defended his new relationship insisting his late wife Gemma would be happy that he has found a new girlfriend.

The TV presenter tragically lost his wife a year ago after she died just three days after she was diagnosed with acute myeloid leukaemia. After telling fans of his new romance, Simon revealed on Loose Women that he was in the “early stages of a new relationship”.

He said: “You have to try and find some kind of life again. I think you’ve got two choices, you either give up on life and remain in a cage and if some people want to do that, that’s totally fine. It’s not for people to judge.

“I just want to be happy again and I know Gemma would want me to be happy.”

The 45-year-old, who first revealed he was dating again on BBC Radio 5 Live last month, admitted that while his decision to date again would be unpopular with some he felt people in the same position as him would agree with his decision.

“I didn’t expect to be in a relationship this early, I really didn’t, but when it comes you think, ‘Well, why can’t I be?'”

Simon and Gemma’s nine-year-old son Ethan moved viewers to tears when he spoke about losing his mum to cancer earlier this week. When asked about his mum’s death on Good Morning Britain, he looked at his dad and replied, “I’m still sad, but I still have you.”

Ethan also revealed the notes and letters his dad had been writing for him since his mum passed, saying: “I thought that even if I’m at school I still feel like daddy is with me.”

Do you agree with Simon’s decision to start dating again? Leave us a comment on our Facebook page @EntertainmentDailyFix and let us know what you think!