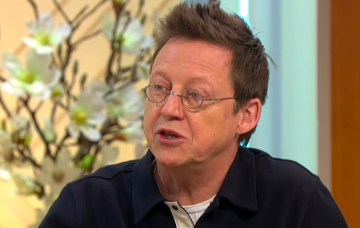 He said the his bosses made a mistake hiring Jo Whiley

Simon Mayo worked at the BBC for an astonishing 37 years – but when it came to leaving, it sounds like his loyal service didn’t count for much.

In two new interviews, the radio veteran has hinted that the BBC pushed him out, saying: “It was never how I thought my BBC career would end.”

Popular host Simon left BBC Radio 2 last year and will next week launch a brand new show at Scala Radio. In a new interview with The Times, he opened up about the controversial decision to bring in radio veteran Jo Whiley to co-host his Drivetime show – and confirmed that he wasn’t consulted.

The broadcaster – who also worked at 5Live and Radio 1 – added: “When all the BBC shenanigans began I inevitably wondered how long it would last. I’d become institutionalised at the BBC. This was the best chance of me being me again.”

Going further in an interview with Lorraine Kelly on Wednesday’s show, the 60-year-old claimed BBC bosses hadn’t supported him properly in the last year and they’d made a mistake in hiring Jo.

Lorraine began by telling him she was sad to see him go when he quit the BBC last year, and he replied: “Yes, I was quite sad – it was a shock to me as well!”

The presenter pushed Simon on his reported clash with Jo, 53, saying: “Maybe if you’d still been doing your show on your own that opportunity might not have happened… I loved your show when it was just you – and this is no disrespect to Jo, who is an amazing broadcaster as well – but what a daft decision!”

He smirked and said: “Do you think?” Continuing, Simon added: “This is like a thousand conversations I’ve had at home. They were trying to do the right thing. They ended up by making a mistake, and I did tell them it was a mistake.”

He added: “For 30 years at the BBC, I had great support from management and everything had been great, and then the last year – less so.”

But he defended the BBC show and reports that they’d lost listeners, saying: “Jo and I finished on 6.2million listeners. So actually the show worked.”

Simon is back on the airwaves from next week and he confirmed to Lorraine, 59, that it would be “me on the radio being me again.”

Fans of the presenter rushed to comment on the new interviews, with one tweeting: “It was an uplifting interview you look so happy. Indeed pleased that the old you is back in the room.”

Another said: “Glad @reallorraine discussed past & present. You still remain most gracious! Looking forward to Monday! #ScalaRadio.” While a third told him: “I haven’t been able to listen to @BBCRadio2 since you left.”

Others were excited for the new launch, writing: “Great to see you & hear all about all the exciting things you’ve got on the go shall be listening on Monday ❤️🍀❤️🍀.” A second added: “I’m looking forward to hearing you on @ScalaRadio, missed you!”

Have you got something to get off your chest? Email your #confessions to confessions@scalaradio.co.uk and seek forgiveness from @SimonMayo and the team. #ScalaRadio pic.twitter.com/vTOcdrjxAj

While one more commented: “Nice to enjoy Breakfast with you @simonmayo. It’s been a while 😊. Looking forward to the launch of @ScalaRadio on Monday x.”

You can listen to Simon – as well as Mark Kermode, Angellica Bell and Goldie – when the station launches on March 4. We can’t wait.

Will you be listening to Simon’s new show? Leave us a comment on our Facebook page @EntertainmentDailyFix and let us know what you think.