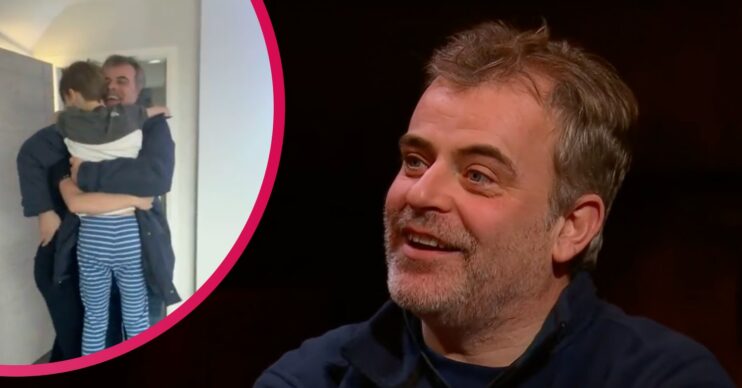 Is someone chopping onions?

Simon Gregson has shared the emotional reunion he had with his sons after his I’m A Celebrity stint.

Fans filled the comment sections of his posts with heartwarming messages, but were also keen to let the Coronation Street legend that he’d been “robbed” in the final.

Simon took to Twitter and Instagram to show the reunion he had with his sons yesterday afternoon.

The star posted a short, 30-second video for his 70.1k Instagram followers and 261k Twitter followers to see.

In the video, Simon is seen walking through the front door of his house, grinning. His wife, Emma, who’s behind the camera, can then be heard saying: “Here he is!”.

Two of Simon’s three sons, Alfie and Harry, then burst out of another room and race towards their dad. Simon then scoops them up in a big hug.

The heartwarming video then ends with Simon still cuddling his sons.

How did he react to finishing second on I’m A Celebrity?

Simon’s emotional reunion with his family comes after the Corrie star finished in second place on this year’s I’m A Celebrity.

Speaking of his time on the show, Simon said: “I didn’t think it was as bad as I thought it would be.”

Prior to being announced as runner-up, Simon told hosts Ant and Dec that he wanted Danny Miller to be King of the Castle. It turns out that Simon got his wishes, but not all of his fans were happy about that.

In fact, many believed Simon to have been the real winner of an I’m A Celebrity victory and let him know in the comments of his reunion video.

What did Simon Gregson fans say?

“Simon, winner all the way,” one fan commented on Simon’s Instagram.

“Oh bless you all, well done Simon you was a pleasure to watch, you’ll always be king to them boys so cute,” another said.

“Aww you was our winner,” a third fan told Simon Gregson.

Read more: Adam Woodyatt ‘risked getting in trouble’ to break rule on I’m A Celebrity to help campmate

“Definitely should have won,” another of Simon’s followers told the star. “You made the castle what it was this year.”

“Daddy’s home and he IS the king,” another fan declared.

Simon’s fellow campmate, and eventual winner, Danny Miller also shared an emotional reunion he had with his family yesterday – twice!

The King of the Castle was reunited virtually with his partner and baby on Lorraine yesterday morning. He also shared a sweet snap of himself with his baby Albert on Instagram yesterday too.

What did you think of Simon’s reunion with his sons? Let us know on our Facebook page @EntertainmentDailyFix.