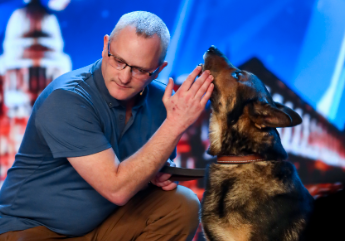 The canine was left fighting for his life after being stabbed

Telly fans will see an emotional Simon Cowell reduced to tears on tonight’s Britain’s Got Talent as he listens to the backstory of a hero police dog called Finn.

Policeman Dave appears on the show with Finn, who nearly died when he was stabbed while trying to protect his partner.

Dave and Finn’s act begins with judge David Walliams showing Finn a word he had written down while Dave wasn’t looking.

Dave then has to guess the word just by staring at his dog.

After gazing at the canine, Dave eventually guesses the word ‘table’, which is the correct answer written down by the judge.

As well as seeing Finn’s ‘mind-reading’ capabilities, the judges also learn of Dave and Finn’s backstory as clips of his injuries and incredible recovery flash on the screen.

Finn, who has worked as a police dog with Dave for seven years, was left fighting for his life when someone tried to stab Dave and he jumped in to save his life.

“Seeing my friend on the brink of death broke my heart,” a clip reads.

An emotional Simon is then asked up on stage and told to open a notepad to reveal a random word that best suits the dog.

He lands on ‘heroic’ and Dave shows everyone that it’s the exact same word written on Finn’s collar.

Simon, who looks visibly upset during the segment, later says of the act: “That was pretty incredible. That’s never happened on any show. A dog will literally give up his life for you.

“For anyone who has been cruel to an animal or dog, just remember if you had treated him well they would have put their lives up ahead of you.”

Watch Britain’s Got Talent on ITV tonight at 8pm.

Will you be watching BGT? Leave us a comment on our Facebook page @EntertainmentDailyFix and let us know what you think of this story.