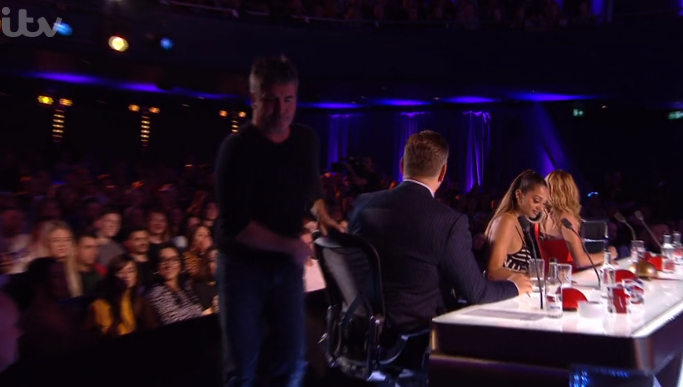 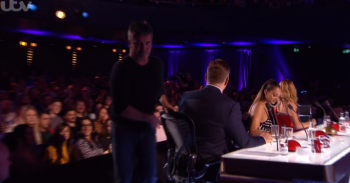 He wasn't impressed at all

Simon Cowell stormed off the Britain’s Got Talent judging panel last night after an act left him completely unimpressed.

Husband and wife Joe O’Malley and Katherine appeared on the show last year but were rejected following their re-enactment of Beauty And The Beast.

However, during Saturday night’s show, the couple returned dressed as Elsa and Sven the moose from Disney’s Frozen as they sang Let It Go.

While Katherine belted out the tune, Joe started tap-dancing, leaving the audience laughing and singing along.

Judges Amanda Holden and David Walliams also loved the performance and got up dancing.

But one person who wasn’t feeling the performance was Simon, who put his face in his hands, while Alesha Dixon also pressed her red buzzer.

Speaking after the performance, Simon asked Katherine and Joe: “I’m not being rude but what the bloody hell was that?

“And I don’t know what that thing is. He’s not a bloody moose.”

Amanda said: “You know, Simon’s been saying the most important thing about Britain’s Got Talent is listening to our audience.”

As the audience erupted into cheers, Simon said: “Seriously? You know what? I’m going to leave and leave it up to you.”

Stepping out of his chair, Simon stood up and walked off the panel as the audience booed.

Katherine and Joe received a ‘yes’ from the audience and judges Amanda and David, meaning they’ve made it through to the next round.

The little girl wowed judges with her rendition of 10, an original song she penned, explaining it is about “how some adults don’t listen to their kids”.

Giving her a standing ovation, Alesha said: “That’s how you do it.”

Simon was impressed by Giorgia too, adding: “I just knew when I woke up this morning this was going to be a great day.

“I have a son who is five and I listen to him, not the other way around. I learn a lot more from him than other people so I get it and it was amazing.”

Did you enjoy last night’s BGT? Leave us a comment on our Facebook page @EntertainmentDailyFix and let us know.