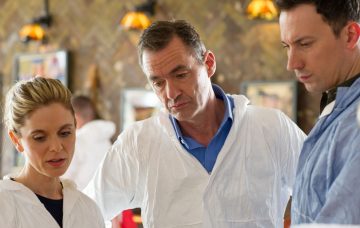 Why did Thomas have to die?

Silent Witness is back and fans are delighted, of course, but there are a few things that have disappointed them.

Silent Witness: What happened in series 23?

The finale, The Great Good part two, picked up from episode nine part one, when a car crash left Jack critically injured.

While he was in hospital, his colleagues tried to find out what the mystery nerve agent was that had infected him.

They stumbled across a chemical agent and things got worse as Jack was put in an induced coma.

However, the team found a cure which they administered to him and he pulled through.

What happened to Dr Thomas Chamberlain in Silent Witness?

Dr Chamberlain, who had been in the show since 2014, met his demise when a nerve gas breached his protective respiratory suit.

He was seen ripping off the helmet of his hazmat suit, as he completed the test on the vial and figured out an antidote.

Thomas was seen being put in a body bag by figures in hazmat suits and was taken away on a stretcher.

How did Clarissa leave?

In another shock exit Liz Carr’s character Clarissa Mullery stunned her colleagues by her decision to quit her job at the Lyell, leaving viewers wondering who would replace her.

Viewers are sad that both Clarissa and Thomas are no longer around.

One commented on Twitter: “Honestly, what even *is* #SilentWitness without Thomas and Clarissa??”

Another said: “I still can’t get over what happened to Thomas.”

A third wrote: “Aww, Jack and Nikki are missing Clarissa (and Thomas). Aren’t we all!!”

Just a few tweets of many echoing the same sentiment. But people said the same about Amanda Burton – 20 years ago and the show is still going strong.

As for Nikki, she was left enraged after discovering Professor Katherine Dukes (Clare Higgins) had performed a secret experiment.

Five men had a nerve agent known as KS 79 administered on them which made them fall ill.

It had devastating consequences with most of the men ending up dead and others becoming infected.

New characters to replace the old

And he could have an interesting impact on the dynamic between Nikki and Jack.

There are hints Nikki and Jack are about to get closer, but will Adam stand in the way?

Read more: Liz Carr in Silent Witness: Why did she leave as Clarissa?

Are you enjoying series 24 of Silent Witness? Leave us a comment on our Facebook page @EntertainmentDailyFix and let us know.