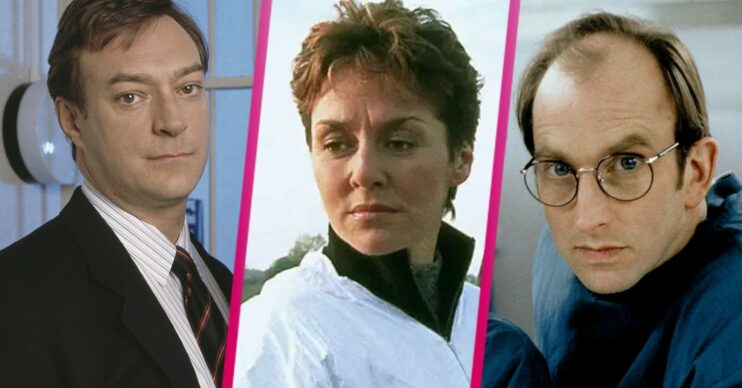 Silent Witness on BBC One: Where are the original cast now?

Silent Witness has been on our TV screens since February 1996 when the very first episode aired on BBC One – so where are the original cast now?

It’s the longest-running TV crime drama, and with good reason – viewers love it!

The series celebrates its 25th anniversary this month, and welcomes back original cast member Amanda Burton.

So as she returns for a special series 25, let’s take a look at the original cast and where they are now…

Silent Witness began on BBC One on February 21 1996, with a team led by Professor Sam Ryan.

Amanda Burton, well known at that stage for her roles in Brookside and Peak Practice, starred as forensic pathologist Sam for eight series.

The main character in the original series was based on Professor Helen Whitwell, a forensic pathologist based in Sheffield.

Writer Nigel McCrery had known her while serving as a police officer.

However, the character moved to London at the end of series three after she was offered the job of professor at a university.

She departed and returned home to Northern Ireland in the second episode of series eight, after a member of her family became a suspect in a murder case.

In real life, Amanda Burton left to pursue other projects.

Amanda left the popular BBC One show in 2004, after deciding it was “time to move on”.

In the 25th anniversary series of Silent Witness, Amanda returns as Sam Ryan for the first time since 2004.

What has Amanda Burton been in since leaving Silent Witness?

Amanda, 65, has been on our TV screens since 1982 when she joined the cast of Brookside as Heather Haversham.

She went on to appear in the likes of Inspector Morse, Boon, Peak Practice, Minder and Lovejoy.

She is most famous for her portrayal of Sam Ryan in the BBC crime drama Silent Witness, a role she played from 1996 to 2004.

The actress went on to star in The Commander, before winning the role opposite Tom Hardy in the 2008 film Bronson.

More recently, she has portrayed Karen Fisher in Waterloo Road, Cherie Le Saux in The Level, and June Bamber in White House Farm.

In 2020, she played crime boss Katherine Maguire in series three of Marcella on ITV1.

He played the role for eight episodes in series one.

Detective Chief Inspector Tom Adams was an investigator with the Cambridgeshire police force.

Silent Witness fans might know him best for having an affair with colleague Kerry Cox before her death.

After leaving Silent Witness in 1996, John went on to play Carnot in the 1998 Liam Neeson adaptation of Les Misérables.

He played Bernadette/Bernard in Coronation Street: After Hours in 1999, and various roles in The Bill and Taggart.

She accompanied him on investigating several cases during his time in the force.

The actress returned in 2020 as another character.

Jobbing actress Clare is also known for playing Josie in Being Human, Joyce in the 2012 series The Syndicate, and Lady Claudine in Parade’s End.

She’s popped up in Downton Abbey as Mrs Bartlett, Shameless as Hazel, and Holby City as Susannah Harris.

Homefront fans will know her as Paula Raveley, but she’s also played Vivian in Rogue, Ohila in Doctor Who, and Felicity Cassidy in Liar.

EastEnders viewers may recognise her for playing Hazel Warren in 2015.

More recently, she’s starred as Bev in Trying, Miss Cackle in The Worst Witch, and Ankara in Into the Badlands.

As well as being a pathologist in his own right, Trevor was Sam’s business partner.

He owned half of the morgue and its facilities.

Trevor decided to stay in Cambridge with his friends and family when Sam accepted the professorship position at a university in London and moved away at the end of series three.

In real life, actor William continued as a jobbing actor in dozens of UK TV shows, but his role in Silent Witness arguably remains his most significant.

Other roles include Coronation Street, where he played Andrew Hopkinson in two episodes in 1993, before popping up again as a prison officer in 2020.

He’s played ACC David Ashdown in Without Motive, William Lloyd in The Courtroom, and Alex Roscoe in Spooks.

Hollyoaks fans might recognise him for playing Jonathan Earnshaw QC in five episodes in 2005.

William has played numerous roles in Doctors, Casualty and The Bill.

Ruth McCabe portrayed Wyn Ryan in three seasons of Silent Witness, from 1996 to 1998.

Wyn Ryan was a major character in the original cast of Silent Witness.

She was the older sister of Sam Ryan and the mother of Ricky Ryan.

Professor Ryan’s sister Wyn moved to Cambridge with her mother some years before Sam’s arrival – she was one of the reasons Sam Ryan relocated.

Initially their relationship was strained, but eventually the two moved in with one another and grew close.

In the first episode of season 3, viewers discovered that Wyn had returned to Ireland.

The character of Wyn made one more appearance in season 3 to visit Sam and announce her upcoming wedding.

She played Mary in the 1989 Oscar-winning film My Left Foot, opposite Daniel Day Lewis.

An acclaimed Irish Actress, she has won an Irish Film and Television Academy Award in 2003 for her role as Margaret McCutcheon in Any Time Now, and again in 2011 for Single-Handed for playing Eithne Driscoll.

Ruth has also played Ma in The Fitz, Nuala in No Tears, Maria Geraghty in The Clinic, Grano in Damo and Iver, and Gwen in Moone Boy.

More recently, she’s played Dympna in the comedy Catastrophe, and Aunty Bronagh in Women on the Verge.

Fred was Sam’s main assistant during post-mortems and on visits to crime scenes.

He often identified DNA samples at the scene of the crime, and linked them to those responsible.

He was also notable for not having many speaking lines, and regularly appearing without speaking.

Scriptwriters did not reveal his fate at the end of series three.

Actor Sam has popped up now and again on TV, but never in such a regular role.

He has starred in the films Kevin & Perry Go Large, Icarus Descending, Devils Are Dreaming, and Les Misérables.

Sam must have a holy face as he’s played a number of different vicars and pastors.

He played Father Saunders in four episodes of The Chase, a vicar in London’s Burning, a Pastor in Be-Longing, and a priest in The Crown.

However, he also played a speed dater in Life Begins!

Kerry was a junior trainee detective who had an affair with Tom Adams.

Her character died in a freak accident in a hospital basement.

Actress Ruth has actually returned to the series as different characters – in 2006 as DI Beth Ashdown, and Ellie Brooke in 2014.

Ruth, now 54, is perhaps one of the most successful of the Silent Witness original cast.

It was one of her first significant roles, but she went on to win the lead role in the 1997 film Fever Pitch opposite Colin Firth.

EastEnders fans might recognise her as Debra in the BBC One soap, but she also played Alice in The Fades, Rebecca in Inside Men, Jen in Utopia, and Octavia Putney in Penny Dreadful.

But, of course, she is now most definitely best known for playing Lady Violet Bridgerton in the Netflix sensation Bridgerton.

He starred as Wyn’s son and Sam’s nephew in season 1 of the long-running crime drama in 1996.

The character regularly got into trouble and was expelled from school for very poor behaviour.

He played Albert in Partners in Crime, Kevin in Siblings, and Wilson’s Aide in The Crown.

She resigned after Kerry Cox’s death.

Actress Janice Acquah went on to appear in films such as Secrets & Lies, Following Footsteps, and Miss You Already.

TV roles include that of Imogen Phipps in EastEnders, Inspector Judy Clarke in Scott & Bailey, and Christine Mcparland in Casualty.

Janice has now retrained as a counsellor and psychotherapist.

Do you remember watching the very first series of Silent Witness? Leave us a comment on our Facebook page @EntertainmentDailyFix.