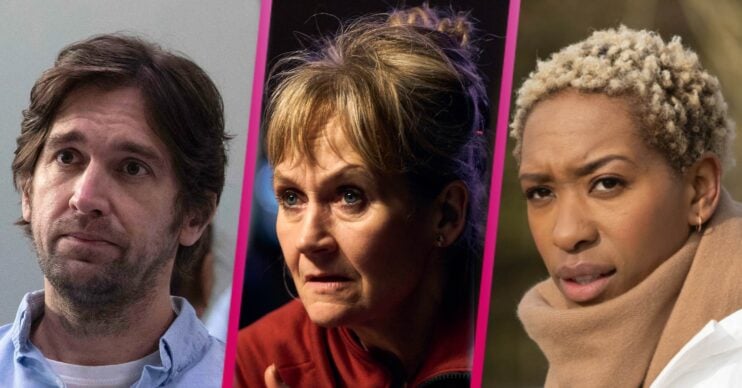 There's a newcomer in the Lyell Centre, and a returning face...

Silent Witness series 24 continues with episode seven this week and there’s some cracking guest appearances – so who stars in Brother’s Keeper cast?

There’s a new staff member joining the Lyell Centre, while a returning face threatens to cause anguish for Jack Hodgson.

Here’s everything you need to know about the cast of the Silent Witness episode called Brother’s Keeper.

She’s well known to TV fans from her acting career which spans more than three decades.

We loved her as Mrs Varley in Bridgerton on Netflix.

She has also starred as Barbara Castle in The Crown, DI Tessa Nixon in Unforgotten and Lace Polly in Jericho.

Lorraine’s many other roles include Playing the Field, Clocking Off, The Syndicate, Cheat and Vera.

She’a actually starred in Silent Witness before as another character, too!

She played DI Rachel Klein in the Coup de Grace episodes in 2014.

He’s known for his Desmonds character Lee and as a regular on the BBC’s The Real McCoy.

Robbie has starred in the films The Firm, Underworld, Snatch and Rollin’ with the Nines.

He starred as Shrimper in Pirates of the Caribbean.

Motherland fans will recognise him as builder Garry in the third series.

The actor has also appeared as Billy Oates in The Frankenstein Chronicles, PCI Pike in Guilt, Inspector Graham Webb in Cuffs and DCI Armstrong in The Fades.

He’s popped up in Grantchester and Holby City, and will soon appear as Charles in the upcoming ITV1 series The Larkins.

In the episode entitled Brother’s Keeper, Ryan is released from prison and comes to live with Jack and their father Conor.

Silent Witness viewers first met the character of Ryan in the episode Fraternity in series 17.

Jack was instrumental in getting his brother arrested for blackmail and coersion.

Actor Owen McDonnell will be well known to fans of crime dramas.

He is probably most famous for his role as long-suffering Niko Polastri in Killing Eve.

This year, he appeared as dodgy Frank Mercer in the second series of The Bay.

Owen’s character was the man behind the murder of Stephen Marshbrook – he didn’t get his hands dirty though, he paid a hitman to do it!

This year, he has also starred as Mark Ryan in Three Families.

The 77-year-old has been on our screens since 1967 and has portrayed characters ranging from an evil angel in Doctor Faustus to a TV director in Batman.

Most recently, he played the uptight father of convict Miri Matteson in Back to Life.

Genesis plays a talented forensic ecologist who joins the team – and proves to be just what they need.

Nikki and Jack ask Simone to help them solve the tricky murder of a promising boxer.

However, Simone questions whether her skills are the right match for the team at The Lyell Centre.

But her unique skills and lively personality proves to be exactly what the team needs.

Casualty fans will recognise actress Genesis Lynea from her short stint in the ED as Archie Hudson.

Bermudan-born Genesis then appeared in the Netflix fantasy drama, Shadow and Bone as Natacha.

Silent Witness Brother’s Keeper – who else stars in the cast?

The murder of a promising boxer draws Nikki (Emilia Fox) and Jack (David Caves) into the world of underground boxing.

Meanwhile, Jack’s brother Ryan is released from prison and comes to live with Jack and their father Conor.

This leaves Jack struggling to maintain peace with his brother and keeping the secret that he might be Cara’s (Rhiannon Jones) father.

Silent Witness continues on Monday and Tuesday September 27 and 28 2021 at 9pm on BBC One.