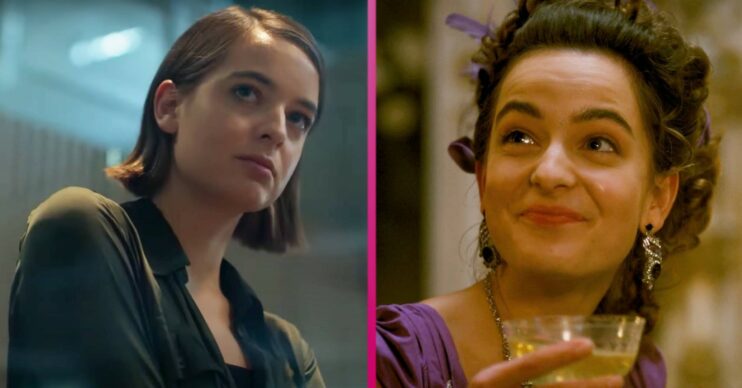 Showtrial on BBC One cast: Who plays posh suspect Talitha Campbell and where do you recognise her from?

Celine Buckens should be familiar to Netflix fans...

Although Celine is only 25, she has been an actress in film and TV shows for over a decade.

So it may very well be that you’ve seen her onscreen before. But can you place where?

Showtrial cast: Which other TV shows has Talitha actress Celine Buckens been in?

According to IMDB.com, one of Celine’s first professional credits was in film War Horse, directed by Steven Spielberg.

She played the central role of Emilie, a French girl who discovers soldiers’ abandoned horses in the Oscar-nominated 2011 flick.

Her castmates in the box office smash included stars such as Benedict Cumberbatch, Emily Watson and Tom Hiddleston.

However, it may be viewers recognise her more from her TV roles in ITV and Netflix shows.

Celine made an appearance in Endeavour as Nurse Daisy Bennett in 2017 before going on to appear as a main character in Free Rein on Netflix.

She played the main role of Mia MacDonald in the light drama series and two subsequent film adaptations.

This led to roles in Warrior and Bridgerton (as Kitty Langham), where she acted in scenes with star Phoebe Dynevor.

Is Celine Buckens from the UK?

Celine was born in Brussels in Belgium but raised in London.

She then read History at the London School of Economics and appeared in Free Rein while studying at uni.

Teen Vogue covered her experience when she was a debutante at the Bal des débutantes in Paris.

Who else is in the Showtrial cast?

Tracy Ifeachor plays Cleo Roberts, a duty solicitor tasked with defending the obnoxious Talitha. She has been in Doctor Who and several US TV series, including Crossbones.

James Frain plays Damian Campbell, Talitha’s father. He also previously played Thomas Cromwell in The Tudors and has been in Grey’s Anatomy.

Read more: The Long Call on ITV: Viewers shocked by twist as they admit they ‘didn’t see it coming’

Showtrial begins on BBC One, Sunday October 31, from 9pm. There are five episodes in the series.