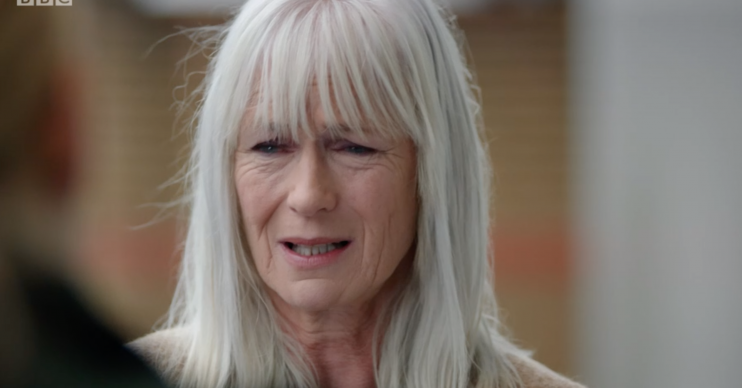 Sian Webber made a surprise appearance as Ruby's mum

Fans were shocked to see the star behind Phil Mitchell’s lawyer Ritchie Scott show up in the hospital drama, playing Ruby’s mum.

The long-running BBC show saw Ruby Spark (played by Maddy Hill) struggling to deal with the stress of having a young baby, as well as keep up with her job as a paramedic.

The recent storyline has seen her grieving for her sister Violette after stepping up to the responsibility of looking after her niece Harmony.

Viewers watched as her mother, Lavender (played by Sian) came to Holby to help her look after the baby, realising that she may not be up to the task.

Ruby didn’t react well to the offer, accusing her mother of playing a part in Violette’s death. Although she had had a stint in rehab to try to get clean, Violette passed away after overdosing on heroin.

Later on in the episode, poor Ruby ended up admitting that she wasn’t in the right frame of mind to look after the young child.

But although the storyline was heart-wrenching for viewers, they couldn’t help but be distracted but the fact that Lavender was also Phil Mitchell’s lawyer in EastEnders.

Is that Ritchie Scott from EastEnders?

One asked: “Is that Ritchie Scott from EastEnders?”

With another pointing out: “It’s Ritchie from EastEnders.”

Sian Webber was first seen in the BBC soap in 2005 but made appearances up until last year.

Not only did the character help out the Mitchells, she also represented the Carters, which eventually saw Mick, played by Danny Dyer, released from prison.

He had been sent down after being accused of shooting Stuart (Ricky Champ) but was later released after an admission from the alleged victim that the suspect was not Mick.

Ritchie was first seen in Walford after she visited Phil’s mother Peggy Mitchell, played by Barbara Windsor. She helped Peggy in Phil’s trial when he was up for armed robbery.