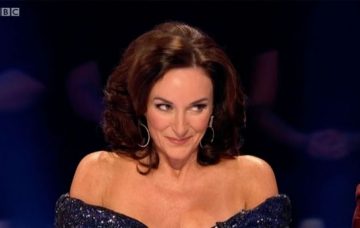 The kiss controversy that refuses to die!

The kiss controversy isn’t quite ready to die down on Strictly Come Dancing, it seems.

After they’d danced the quickstep to Lightning Bolt by British singer Jake Bugg, Shirley Ballas poked fun at the pair.

“Not your best dance today, but a good effort. You did a little misstep,” she said, before adding with a naughty grin: “You felt it, didn’t you Seann? Tell Shirley you felt it. I know you did.”

It raised some titters in the studio audience, but some viewers weren’t that amused, assuming it was a reference to his dalliance with his pro dancer…

Others love the dynamic between the judge and comic, though…

I live for the flirty frisson between Seann and Shirley.#strictly pic.twitter.com/BCEhOeGK2S

Maybe Seann should be asking Shirley if she felt it.. #strictly pic.twitter.com/yQsoq95era

She had been dating Anthony for around 10 months but, according to The Sun, the split was prompted by concerns over Buswell’s working relationship with Joe Sugg.

YouTube star Joe and Dianne took to the floor and danced the waltz to Sleeping At Last’s The Rainbow Connection.

After, Bussell congratulated Joe for “taking control” and suggested the pair were creating a “sweet romance” on the floor, causing more laughter across the auditorium.

Do you think the judges should refrain for referencing any headline news about the dancers and celebs’ private lives? Leave us a comment on our Facebook page @EntertainmentDailyFix and let us know.