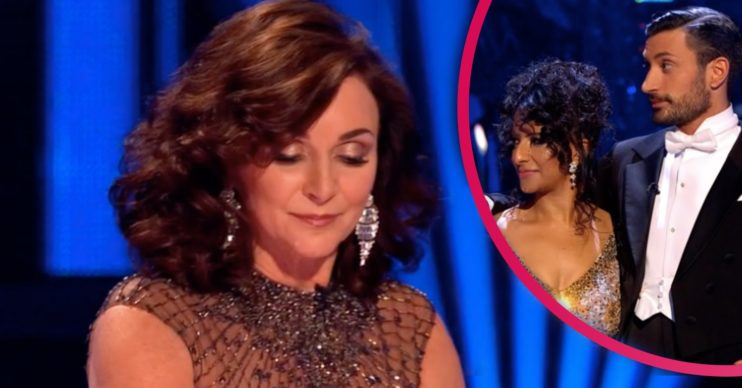 The head judge, 60, made the final decision to kick Ranvir Singh and Giovanni Pernice off the show, while Jamie Laing and Karen Hauer were saved from elimination for the fourth time.

This came despite Ranvir and Giovanni scoring higher on the leaderboard.

Dozens of angry Strictly viewers took to Twitter to share their disappointment at Ranvir and Gio leaving the BBC show.

Some fans think Ranvir was ‘robbed’ on Strictly

Many claimed that the couple were “robbed” and deserved to have stayed.

One viewer fumed at Shirley with: “So Ranvir scores higher on the night but goes home. Shirley is a disgrace #Strictly.”

Another viewer argued: “Shirley, voting for Jamie?! Well I never. Ranvir was robbed – she deserved to be in the final.”

A third viewer ranted: “#strictly Shirley is a joke. She makes a mockery of the whole show. Shame on her. No WAY is Jamie a better dancer than Ranvir.”

Ranvir… never once been in the dance-off, and Shirley boots her off.
I think Shirley was wrong.#Strictly pic.twitter.com/glyXjNdJIY

And a fourth user claimed: “#Strictly wrong decision Shirley…. Jamie was not as good. This series has been contentious all the way through.”

Wrong decision Shirley…. Jamie was not as good. This series has been contentious all the way through.

“At the end of the day Jamie has been in the bottom two a few times and it was his time to go, Shirley saying Jamie danced with more conviction makes no sense seeing as he was doing a fast Latin number and Ranvir had a Waltz, what more could she have done?”

Shirley had a tough decision to make

Indeed Shirley argued that she wanted to save Jamie and Karen because they portrayed more “determination”.

Shirley said: “This is very difficult. I’ve grown to love both – I’m getting quite emotional now.

“Musicality, determination, conviction from both teams. They gave their all.

#Strictly Shirley was👇 Ranvir by far the better dancer 😔 pic.twitter.com/QAUsuUP1v4

“But I just feel that one couple have a little bit more determination.

“A little bit more ‘I’m not leaving without that trophy’. And with that in mind I’m saving Jamie and Karen.”

However, not all viewers disagreed with Shirley’s somewhat controversial decision.

In fact, some came out swinging in her defence.

“I’m sorry your faves didn’t make the final but you can’t just put the blame on her, and definitely not on the other couple in the dance off. They can’t do anything about it.”