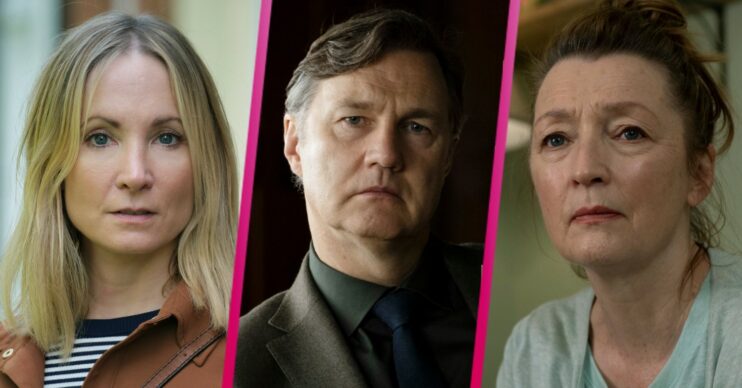 Sherwood on BBC One: How many episodes is it, is it a true story, and is Sherwood a real place?

It's THE drama to watch this summer

Sherwood on BBC One is every bit as good as it looks, with a vicious murder at its centre and a mind-blowing cast – so how many episodes is it and where is it filmed?

Is Sherwood a real place, and it is based on a true story?

It’s the TV thriller that will leave you counting the hours until the next episode.

What is Sherwood on BBC One about?

Sherwood on BBC One centres on two shocking and unexpected murders that shatter an already fractured community.

Episode one of the thriller begins with a wedding, and ends with a brutal murder.

And the motive seems linked to decades-old grudges in the Nottinghamshire ex-mining town.

Detective Chief Superintendent Ian St Clair is called to investigate when the murder occurs in the ex-mining town he grew up in.

It’s a community that still bears the scars of divisions from the miners’ strike of the 1980s.

Put simply, there’s a queue of people who held grudges against the deceased.

The drama is probably the best thing you’ll watch this year, made more compelling because of its roots in a real life tragedy.

To tell you anything more would be to spoil your enjoyment, and enjoy this you will.

Are the Sherwood episodes based on a true story?

BBC One’s Sherwood is based on a tragic true story.

At the beginning of episode one, the viewer is told: “This story was initially inspired by two killings which took place in the Nottinghamshire mining community where the author [James Graham] grew up.

“For the purposes of dramatisation, the characters and events have been fictionalised.”

Writer James says: “Sherwood is essentially a six-part thriller, but it’s hugely personal to me and inspired in part by real events in my hometown in Nottinghamshire.

“I hope, and I say this as someone who was deeply affected by the story and the real killings that in part inspired the series, it will shock but also move and entertain.”

Talking about his motives for writing the series, he added: “This isn’t a literal adaptation, these are fictional characters, but it is inspired by the many stories that that real events evoked in the community.”

He reveals he consulted with the real people involved in the true crime.

James said: “We’ve been in consultation with the real people throughout.

“The first victim’s family in particular have been through this with us, and we have a really good relationship.

“I think they’ll be the first to admit that reliving this is very hard for them, but that’s why we wanted them to lead that experience.”

In 2004, two separate and unrelated murders in a Nottinghamshire mining village launched an intensive search in an area of woodland.

Robert Boyer, then-42, was wanted in connection with the killing of former miner Keith Frogson, 62, who was found dead on his doorstep following a brutal attack as he left a local pub in the Nottinghamshire pit village where he lived.

Meanwhile officers were also searching Annesley Woods for 55-year-old Terry Rodgers, who was sought in connection with the murder of his daughter, Chanel Taylor.

The two murders were carried out within two weeks of each other, and both killers went to ground in woodland near Annesley Woodhouse.

Police eventually arrested both men and charged them with their crimes.

Is Sherwood a real place?

Sherwood on BBC One is set in the Nottinghamshire mining village where writer James Graham grew up.

The thriller is set near Nottingham.

Sherwood IS a real place.

Of course, it’s perhaps best known for its forest, Sherwood Forest, where Robin Hood was said to have lived.

Where is Sherwood filmed?

Cast and crew filmed Sherwood in and around Nottinghamshire

Production were seen filming near the Pigeon Tower in Rivington, Bolton.

Some scenes were also filmed in Blackpool.

How many episodes is Sherwood on BBC One?

Sherwood on BBC One is six episodes in total.

It’s quite possibly the best six hours of TV you’ll watch this year.

When does Sherwood start and how can I watch it?

Sherwood starts with episode one on Monday June 13 2022 at 9pm on BBC One.

Episode two follows on Tuesday June 14 2022 at the same time.

All episodes will be available to watch on BBC iPlayer afterwards.

Who is in the cast of the Sherwood episodes?

Perhaps it’s best to ask who ISN’T in the cast of Sherwood.

It’s THE best cast we’ve seen together on TV possibly ever.

Think of the best Northern actors on TV these days, and I’ll bet they are all here.

He says of the cast: “You know, Sean Gilder, Lesley Manville, Lorraine Ashbourne, all of us just hanging out and chatting and laughing and then we get called to set and to have to have a big fight and an argument.

“But it’s people like Kevin Doyle and Claire Rushbrook, everybody that came in to the cast every day, Robert Glenister – you just went, oh my god, they’re in it as well!

“It was just phenomenal, everywhere you turned there were people who are just top of their game really.”

Sherwood cast on BBC One – who’s who in the episodes?

Viewers seen her getting married in episode one of Sherwood on BBC One.

Lorraine Ashbourne and Philip Jackson play Mickey and Daphne Sparrow, alongside Perry Fitzpatrick who stars as their son Rory Sparrow.

Robert Glenister portrays DI Kevin Salisbury, and his own son Tom portrays a younger version of him in the flashback scenes.

Sunetra Sarker portrays the Sheriff of Nottingham, and Terence Maynard is DS Cleaver

Are you excited to watch Sherwood on BBC One? Leave us a comment on our Facebook page @EntertainmentDailyFix.