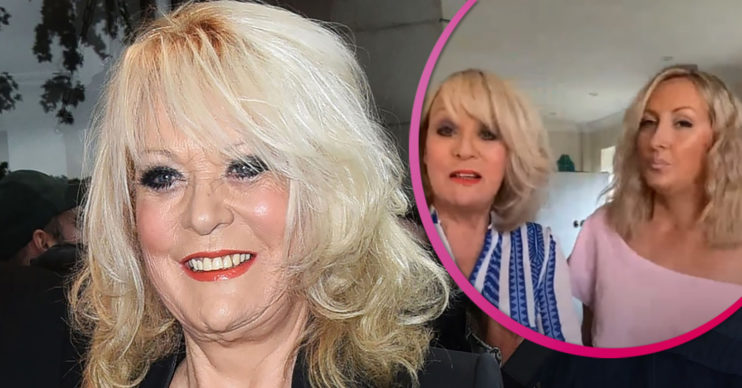 The pair appeared on Loose Women

Sherrie Hewson has opened up on losing her beloved brother Brett Hutchinson on Loose Women.

The Benidorm actress, 69, appeared alongside daughter Keeley as she spoke to her fellow ITV stars today (August 4).

It comes months after Sherrie lost her brother Brett in April following a battle with an incurable brain tumour.

What did Sherrie Hewson say?

As the UK went into lockdown, Sherrie was unable to visit her brother in hospital – leaving her “completely broken.”

Thankfully, the former Coronation Street star was fully supported by her daughter Keeley.

It’s been the hardest thing ever and I was completely broken.

Speaking to Denise Welch, Andrea McLean, Janet Street Porter and Saira Khan via video call, she explained: “It’s been the hardest thing ever and I was completely broken, I still think he’s in Wales.

“I got through it with this gorgeous daughter of mine because she is my rock and she is the person that keeps me going.

“It’s been very weird because lockdown has been weird anyway, and then for the last two weeks of his life I wasn’t allowed to go.”

Speaking about Brett’s funeral, she said: “I was quite pathetic and broke down and couldn’t cope, and the person who owned the funeral parlour was wonderful, and said,’ You’re just in shock, you’ll stop shaking’, and then I drove home for an hour and a half and I was fine.

“I got home and, to be honest with you, I opened a bottle of wine and I drank the lot!”

‘Keeley has always been there for me’

Sherrie went on to credit Keeley for helping her overcome her darker moments, including her divorce.

She continued: “I thought ‘do you know what it’s OK’. But Keeley has always been there for me. The person who has kept me going through divorce and tsunamis.”

Keeley was also left heartbroken, adding: “It was awful. For all of us it was awful, the whole family were devastated as you can imagine.

“Brett was a massive character in our family. He was an amazing man all-round and he didn’t deserve to go.”

Brett was diagnosed with grade 4 glioblastoma in March 2019, and had been given 18 months to live following his diagnosis.

The former soap star went on: “He was so wonderful… And then suddenly he got a second tumour and the second tumour took his life away, and took him away and everything he was.

Sherrie previously opened up on her heartache in an emotional interview back in June.

She told OK!: “I take three steps forwards, two steps back. I’m trying to move forward, but I just wish my brother was still here.

“I’m devastated, my heart is broken, but I have to find a way to mend my heart.

“I’ve got to find those little bits of my heart and I will find them because I’ve got a lot to be thankful for.”