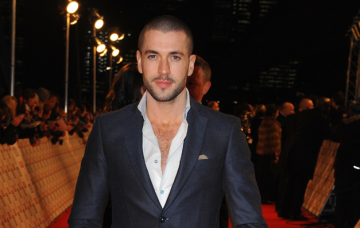 They have thanked him for making them think twice

Coronation Street actor Shayne Ward has said his character’s suicide has already made people at risk of taking their own lives stop and seek help.

The soap has been praised for raising awareness of mental health issues and male suicide, and Ward said he has been overwhelmed by the response he has received.

He told The Sun: “A lot of people who are considering attempting suicide have got in touch to say, ‘I’m calling somebody now. I was attempting it and you’ve helped me.’

“The response has been truly overwhelming.”

Ward has previously said he was “instantly scared, nervous and heartbroken” when he first learned he would be involved in the male suicide storyline several months ago.

The actor, whose own family has been touched by suicide, said he sought out a therapist to help him understand it better before shooting the harrowing scenes.

But filming still took him to a dark place.

Read more: Signs Aidan had been contemplating suicide for months

“This is affecting millions of people around the world every single day, and when I read the stats I couldn’t believe it,” he said.

“So when I’m getting into that place, it’s a really, really dark place which again breaks my heart.

“You feel that there is no light at the end of the tunnel.

“You feel lost, you feel hopeless, powerless, unloved and you feel like you can never make things right.”

The 33-year-old said the actual shoot was upsetting for everyone involved and that the cast and crew knew they were “creating a moment not just in Corrie’s history but also for suicide”.

After Wednesday’s episode, the actor tweeted praise for fans for their bravery in opening up about their problems.

Read more: The Connors are shocked by Aidan’s will

He said he hopes the conversation will continue.

“Tonight’s @itvcorrie Episode is Powerful and full of raw emotion,” he said.

“Some Incredible performances from all The cast.! [sic]

“I’m so proud of all your bravery in doing so. TALK – YOUR VOICE WILL BE HEARD.”

Shayne previously encouraged viewers to find help and advice on ITV’s website in a video recording during which he said: “Talking can bring relief and it can help us see a way through, there is help and support available right now.”

If you are struggling, contact Samaritans for free on 116 123 for support and guidance.