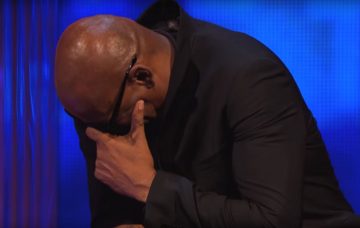 Shaun Wallace blasted by fans for “shocking performance” on The Chase

The Dark Destroyer branded "worse than a cat" by ITV viewers...

The Chase fans have laid into Shaun Wallace for what they believe to be “a shocking performance”.

On Tuesday (5 March), the chaser – better known for his stage name The Dark Destroyer – made several mistakes, according to viewers, who blasted his attempts to beat the contestants.

Read more: The Chase apologises over question about The Prodigy after Keith Flint’s death

They said the brainiac needed to “up his game” after failing to win the Final Chase, and one furious viewer even suggested “a cat would do better than Shaun Wallace”. Meow!

While Shaun’s mistakes were great news for the hopeful contestants David, Sandy and Alys who walked away with £7,000 between them, fans were LIVID and even called for Shaun to be “fired”.

Perhaps they’d like to try their hand at his job for a while?

Read more: The Chase fans furious as contestant is ‘allowed a second chance’

Shaun angered fans yesterday when, despite knocking out one of the contestants in the head-to-head, he failed to catch the remaining three in the final round.

The 58-year-old barrister only had to catch-up with a score of 14 – considered average by viewers, who were then appalled when the chaser was unable to win.

One question in particular left fans tearing their hair out, when host Bradley Walsh asked: “A stampede of wildebeast features in what 1994 Disney film?”

Of course, the answer was The Lion King, but Shaun was forced to pass.

After getting several question wrong and losing, Shaun admitted: “That was pathetic by me.”

He went on to add: “That was a poor day at the office. I really should have got that.”

And disgruntled fans were quick to agree, blasting the chaser on Twitter and performing a savage character assassination.

Shaun is so bad #thechase

Wow, that was shocking Shaun. Have he actually watched the Lion King #TheChase pic.twitter.com/hFXsvgxzfd

Shaun needs to be fired after this #thechase

Couldn’t a cat do better than Shaun Wallace? He seems to always lose. #TheChase

How does that Shaun Wallace still have a job on the chase? He’s awful, he must have given away the most amount of money of all the chasers! #TheChase

One said: “Wow, that was shocking Shaun. Has he actually watched the Lion King? #TheChase.”

Another added: “Shaun is so bad.”

A third typed: “Shaun, up your game.”

“Shaun needs to be fired after this,” claimed another, while one more said: “Couldn’t a cat do better than Shaun Wallace? He seems to always lose. #TheChase.”

Is it just us, or is anyone else beginning to feel sorry for Shaun?

Does Shaun deserve this criticism? Leave us a comment on our Facebook page @EntertainmentDailyFix and let us know what you think!