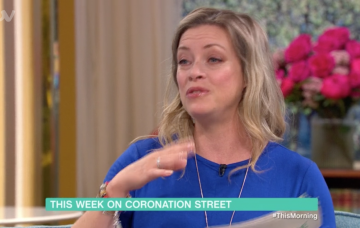 This Morning’s resident soap expert, Sharon Marshall, has addressed rumours that the new Coronation Street boss, Iain MacLeod, is set to axe favourite characters as he makes his mark on the show.

Sharon told presenters Holly Willoughby and Phillip Schofield that the rumours about current Corrie boss Kate Oates’ replacement aren’t true – and if fact he hasn’t even started his new role, let alone sacked half the cast.

During her soap segment on the show earlier today, Sharon revealed: “Kate Oates is going in the next few weeks and newspapers full of lots of speculation.

“This always happens with a new boss, people think he is going to come in and axe everyone – but he’s not.

“He is actually on paternity leave. He hasn’t been to a single meeting at Corrie, I can promise you.”

Sharon went on to reveal that while Iain is enjoying some well-earned time off following the birth of his child, he is set to inherit some amazing storylines when he arrives at Corrie…

“What I can say is Kate Oates is leaving and we have seen the incredible storylines she has put in place.

“Kate will do what she did at Emmerdale and that’s put a good framework of storylines in before she leaves.”

“There’s also storylines lined up for Audrey, Sally, Tyrone, Fiz and Michelle and they’re all going to be huge.”

Are you looking forward to Iain taking over at the Corrie helm? Leave us a comment on our Facebook page @EntertainmentDailyFix and let us know what you think!