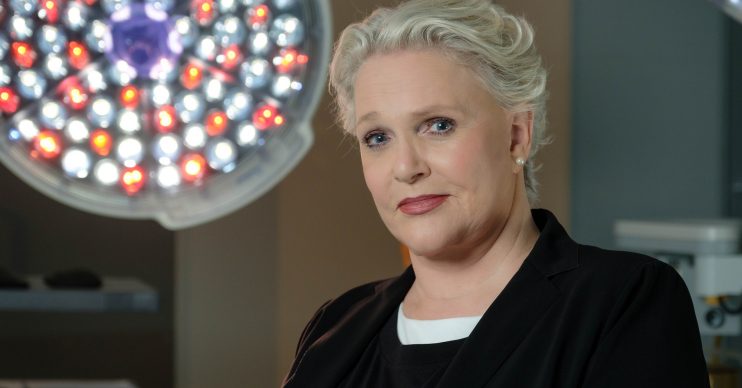 Zsa Zsa, played by Cagney and Lacey star Sharon Gless, had been called back to Holby from across the pond by her old friend Dylan.

He believed she was the only person who can treat Faith and Lev’s boy Luka, who has a cancerous tumour on his brain.

Zsa Zsa was confident that she’d be able the help the little lad. But before performing the complicated and gruesome operation, she warned his parents that it wouldn’t be easy.

“Worst case scenario is that Luka does not come out of it,” she said. “I will do everything I can to keep that from happening, but you need to know that’s a possibility.”

The surgery was bloody and intricate, as Zsa Zsa used a drill to get into Luka’s skull.

But Zsa Zsa had made a tragic discovery. Luka had a further, inoperable tumour on his brainstem. Even someone as skilful as Zsa Zsa would not be able to remove it without a fatal risk to the boy. The procedure wasn’t the success everyone had hoped.

Lev was understandably angry and took out his frustrations on the surgeon, shouting, “You failed, you failed!” and kicking over a chair.

A less confident Zsa Zsa confessed: “It doesn’t matter how many lives we save, or how amazing we think we are.

Every once in a while the human body does something to remind us who’s really in charge.

“And they don’t teach us that in med school.”

Viewers welcomed Zsa Zsa back on Twitter, with some begging for a more permanent return…

Dylan and Zsa Zsa may also be my favourite pairing! I forgot how much I loved them! heartbreaking scenes or humorous they always do it so well! We need Zsa Zsa. Can we have her every week?! #Casualty

Zsa Zsa wasn’t the only familiar face returning to the long-running medical drama.

Charlie (Derek Thompson) made a surprise appearance in the emergency department, barely two weeks after his beloved wife Duffy’s sudden death and funeral.

All of his colleagues and friends assumed he’d need longer at home to grieve. So he gathered all the nurses together to tell them that as far as he was concerned he’d had enough time off and it was business as usual.

“I’d like to thank you for the support you’ve all given me,” he said. “I got cheesed off sitting watching telly all day and drinking endless cups of tea.”

But as soon as the patients started coming into the A&E, it became clear that Charlie wasn’t as ready as he thought he was.

He had to tell an old friend, a local butcher who has been rushed in with a gash on his arm, that Duffy was dead. It was almost too much for Charlie to bear.

Then he found his ‘dementia friendly’ badge in his pocket, and broke down again. The final straw came when, frustrated at the changes that Jacob had made to the rota while he was away, Charlie uncharacteristically lost his temper and stormed off.

Head to our Facebook page @EntertainmentDailyFix and let us know what you thought of tonight’s episode.