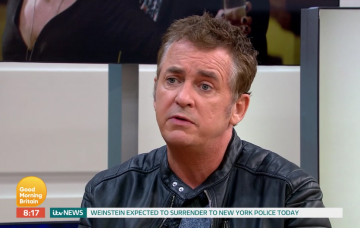 Babs has been living with the disease since 2014

Earlier this month, Barbara’s husband Scott Mitchell revealed the actress, 80, had been diagnosed in 2014 but chose to keep it private until now.

On Friday’s Good Morning Britain, Shane called Scott a “lovely geezer” for “stepping up to the mark” and looking after his wife.

Speaking about the actress, Shane told Ben Shepherd and Kate Garraway: “Bless her, the lovely Barbara.”

When asked if he has spoken to Barbara since her diagnosis was made public, Shane said: “Funnily enough, no. I’ve spoken to Scott.

“When the news got announced I didn’t want to use the word Alzheimer’s or dementia because I know what Babs would have been like.

“I imagine me talking to Barbara and her saying, ‘I’ve got a little spot of forgetfulness,’ that’s where I am when I speak to Scott.”

Shane said the couple are “battling on” and “everyday’s a different day for him.”

Shane, who plays Alfie Moon on the BBC soap, added: “For me, he’s every man I’d like to be, looking after his lovely wife.

“God forbid it ever happens to any of us. He steps up to the mark and he’s a lovely geezer.”

Scott broke the news of Barbara’s Alzheimer’s on May 10.

During the emotional interview with Jane Moore for The Sun, Scott said: “Since her 80th birthday last August, a definite continual confusion has set in, so it’s becoming a lot more difficult for us to hide.

Barbara was said to be “thrilled to bits” with the support she’s received from the public.

Shortly after the news broke, Shane shared a touching message to Barbara.

He tweeted: “So my gal The Duchess has got a ‘little touch of forgetfulness’ ’cause I promise you that’s what she’ll be calling it right now and why not?

He continued: “Now the thing with this ‘forgetfulness palaver’ is she might not seem herself on certain days and that’s OK, but if you see her out ‘n’ about, you just remind her how much YOU, WE, ALL of US absolutely love and adore her.

“Cause we genuinely do…and as long as she knows that then this ‘forgetfulness palaver’ can as Peggy Mitchell once said to Alfie Moon ‘JOG ON’.”