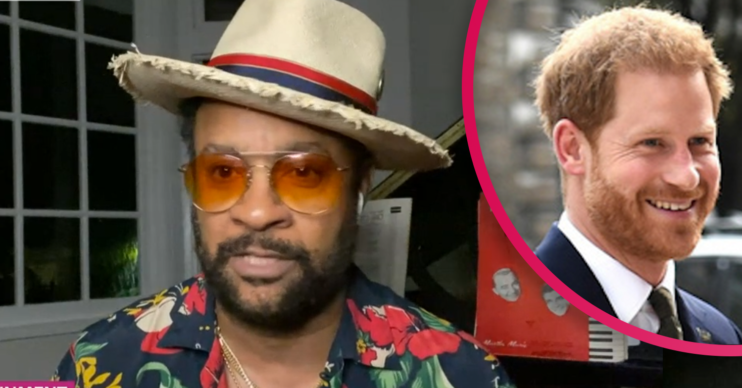 The star spilled the beans on GMB

The Mr Boombastic hitmaker met the senior royal when he visited Jamaica some years back.

“The thing is, everything was about the prince coming to Jamaica,” he told Adil Ray and Ranvir Singh.

Seeing how excited his little girl was, Shaggy decided to bring her along – but the meeting didn’t exactly go as expected.

“When she got there, if you look at that picture, Prince Harry was like ‘I’ve never met anyone else impressed’,” the singer laughed.

“She thought he was supposed to look like the prince that was in Snow White or something like that – but he didn’t come on a horse.”

Fortunately, Harry saw the funny side.

After watching the singer perform on stage, he approached him a second time.

Shaggy added: “He shook my hand and was like ‘it wasn’t me!'”

What does Shaggy mean?

During the GMB interview, the star also opened up about the meaning behind his stage name.

“The crazy thing is I got the name Shaggy because my hair was messy – like Shaggy from Scooby Doo,” he revealed.

“I really hated the name for years.

“But then I came through Heathrow and was picked up by a guy from my record company.

“We’re driving and Oh Carolina came on the radio and the guys says ‘I can’t believe they’re playing a record by a bloke called Shaggy.

“I was like Shaggy? Whats’ wrong with Shaggy? And then of course he explained it to me. And I was like wow it’s the coolest name!”

Bringing the interview to an end, Adil then asked Shaggy about the Black Lives Matter movement.

The singer revealed: “There were some protests in support of Black Lives Matter in Jamaica but a lot of it was really contained because of COVID.”

He added: “This government really jumped in where COVID was concerned.

“As soon as it happened, they shut the place down, there was a curfew, and by law, you have to wear a mask anywhere in public.

“So as much as people want to come out and support the movement, there were a lot fo restrictions in place.

“People on social media were supporting it and got involved”

Are you a Shaggy fan? Visit our Facebook page @EntertainmentDailyFix and let us know what you think of this story.