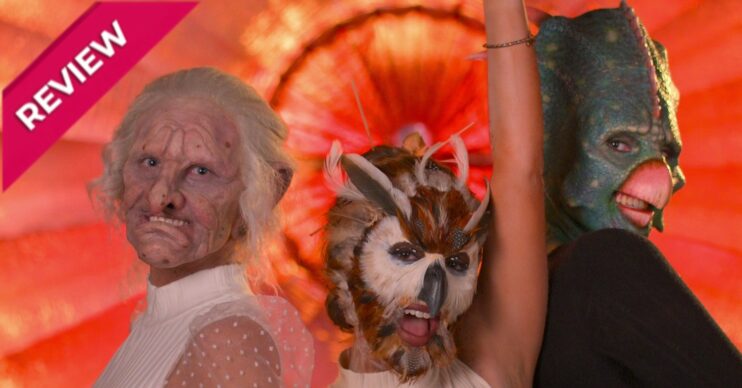 This blind date with a difference relies on animal instincts...

Stop me if you’ve heard this one before, Sexy Beasts – a baboon, mouse and stone statue walk into a bar… for a date with a sexy devil.

Well, that’s what you’re greeted with in the new Netflix dating show with a twist.

A revival of the 2014 BBC Three series, Sexy Beasts tracks one singleton as they date three potential matches – all while wearing Hollywood level prosthetics.

Voiced by Catastrophe’s Rob Delaney, the series follows their first date drinks, and second date day out, before the leading singleton finally chooses a winner of their affections.

The first couple of episodes are insanely entertaining – if only for the general public around them wondering why the hell a dolphin is bowling with a praying mantis like that’s normal.

As can be expected, it also takes quite the person to sign up for a series such as this, none more so than a panda from New Jersey who declares she ‘wants to get married and have babies by the time she’s 26’ – before grilling a baffled looking bull about his health insurance policy.

You can’t say she doesn’t know what she wants.

The make-up team do an absolutely superb job in transforming the gang of lonely hearts into weird and wonderful creatures. It really is impossible to tell what they look like underneath the masks and it delivers some genuine surprises.

But sadly, the concept kind of wears thin after a few episodes. And with each installment clocking in at only half an hour, it means we barely get time to know any of the people taking part.

It does mean it’s an easy binge watch though, if you’re inclined to stick them out.

Is Sexy Beasts season one worth the watch?

Sexy Beasts has a cool original concept and is pretty bonkers, but it also runs stale pretty quickly.

Thankfully, the casting team has brought some interesting characters on board to keep us interested throughout the six episodes.

It needs some adaptation though if it were to continue. The distinct lack of LGBT representation is noticeable and there’s really no reason for it in this realm of bizarre fantasy.

As well as that, everyone is conventionally attractive anyway – like, ‘could be on Love Island’ attractive – so the whole ‘looks aren’t everything’ ideal seems almost null and void.

Sexy Beasts has already reportedly filmed season two, which is out later this year, so hopefully this problem is fixed.